‘Murder in the County Monaghan’: A case of ‘criminal lunacy’

In 1880, William Davidson was found not guilty of the murder of his stepfather 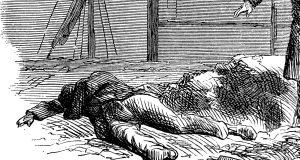 In Drumsnat, a civil parish southwest of Monaghan town, two men lived in a cottage on a farm. One, John Wright, was the stepfather of the other, William Davidson. On January 23rd, 1880, William beat John to death with a shovel.

Patrick McPhillips was the first to hear about the “Murder at Smithborough”, as The Irish Times would bill it. Variants in other newspapers included the less-specific “Murder in the County Monaghan”. The case was not a major story in the press and was covered only as part of the Monaghan Assizes at which the details were recorded.

McPhillips was in the bog not far from the cottage when Davidson approached. “John Wright is no more,” said the younger inhabitant of the cottage, who was about 35. “He will give you no more bother – he is done for at last.” Asked next what he had done, Davidson replied that his stepfather, who was aged about 60, was “lying on the floor”.

McPhillips went to investigate. He knew the house – earlier on the same day he dropped a bag of pollard to Wright, who had purchased it from Thomas Dunne, McPhillips’s boss.

McPhillips found Wright inside, lying on the floor near the fire. His body was still warm, but he was dead. Among his injuries were a large gash on the back of his head and a fractured temple. A shovel lay on the floor, spattered by the same blood that had reached a nearby dresser during the attack.

Outside, McPhillips called for help, attracting a man named Simpson. Davidson himself then approached house, pulling a long stick from a hedge and frightening the men – but assuring “Pat” that he meant him no harm. McPhillips left and alerted the police.

“John Wright came back with a bag of dust,” said Davidson after his arrest, “and he wanted to put it under my bed, and I would not let him, and I put it out and he came and struck me with an old shovel, and said he would kill me, and I took it from him and killed him, and there he is for you.”

The case and trial was covered in a number of newspapers. The most detailed appeared in the People’s Advocate and Monaghan, Fermanagh, and Tyrone News of Saturday, March 13th, 1880.

That report provides both a timeline for the deteriorating relationship between stepfather and stepson, and insight into Davidson’s mental state, the stories about which proved to be important at trial. Up until the previous Christmas, it appeared the two men lived on good terms. Then followed a quiet period, during which neither man was seen by their neighbours for a number of weeks.

On January 20th, Wright went to the police, concerned that his stepson might cause him harm. When questioned, Davidson made light of the situation. No action was taken. The next date on the timeline was January 23rd, and the purchasing of the dust at the centre of the men’s final dispute.

Dunne, the man who sold Wright the supplies on the day he died, gave evidence at Davidson’s trial for murder. On cross-examination during a hearing on Friday, March 5th, he reported “extravagant acts” on the part of Davidson, which would prop up defence of insanity. Dunne told the court that on one occasion, “the prisoner jumped on a hen until there was nothing left of it but a mass of feathers”.

The Advocate reported: “The deceased, about 10 days before the occurrence, told the witness that he was afraid to sleep in the house with the prisoner as he was going mad, and that he had not taken his clothes off on the previous night. The witness mentioned as a further proof of the prisoner’s insanity, that he refused to take some money which he (witness) owed him, and that he said on another occasion that a chest containing 71lbs of tea had once come to the railway station for him and he had never received it. This was quite untrue.”

Both doctors, in their testimonies, mentioned Davidson’s irritation at the dust about the house, which seemed, according to reports, to be one catalyst for the killing

The court was told another story, about Davidson walking in a circle in a field for six hours straight. Another witness alluded to the dead man’s fear – while he was alive – that Davidson would kill him. A more general summation, from a man named John Sweeney, was simply that Davidson “had latterly been very strange in his manner”.

Two doctors who had examined Davidson gave evidence on March 5th. The first, Dr Woods, thought the prisoner was of “weak intellect, and that a little irritation would develop it into insanity”. Dr Robinson, superintendent of the Monaghan Lunatic Asylum, said the prisoner was of “feeble mind” but had no hallucinations. In Dr Robinson’s opinion, the prisoner knew he was committing a crime when he killed his stepfather.

Both doctors, in their testimonies, mentioned Davidson’s irritation at the dust about the house, which seemed, according to reports, to be one catalyst for the killing. The jury found Davidson not guilty by reason of insanity after 30 minutes’ deliberation.

“Criminal lunatic”, as is common in 19th century criminal files, is written in red ink on the official documentation concerning William Davidson’s case. The language, archaic and jarring as it is now, was then in common medical and official use. Data about “Lunatics and Idiots” were even tabulated in census reports.

The census report for 1881, for example, lists 389 “lunatics and idiots” in Co Monaghan: 218 males and 171 females. Other data for those individuals were recorded, including occupation and religion. For instance, we’re told the vast majority of the grouping in Co Monaghan – about 75 per cent – were Roman Catholic. This was a slightly lower proportion than nationally, where 14,723 of the 18,413 “lunatics and idiots” – or about 80 per cent – were listed as Catholics.

The census also reported the descriptions of the “lunacy or idiocy”: mania; melancholia; monomania; idiocy; idiocy with epilepsy; dementia; dementia with epilepsy; epilepsy; and unspecified. The physical “causes” were many and included: fever; epilepsy; child birth; sun stroke; and “malformation of the brain”, among others.

Another category of causes, listed as “moral or mental”, included: disappointment; love and jealousy; terror; grief; reverse of fortune, religious excitement; excitement; ill-treatment; study; anxiety; and pride. Grief (485) was the most common moral or mental cause in 1881, while intemperance was the highest-ranking physical cause (297), followed closely by epilepsy (284). Larger again was the cohort marked “hereditary” (871), and the most voluminous category by far were those with causes marked “unspecified”, at 14,254.

William’s quite-thin case file in the National Archives bears the tell-tale documents normally associated with “criminal lunacy”. Among them is the original assizes warrant issued to the governor of the prison in Monaghan, directing him to receive the prisoner following the trial in early March.

The boiler-plate Criminal Lunacy Application of Removal also survives, which specified Davidson’s destination – the central criminal lunatic asylum at Dundrum, which was the norm in such cases. Another familiar refrain is handwritten next to the section marked “Sentence”: “Acquitted on the grounds of insanity and ordered to be detained during the pleasure of the Lord Lieutenant.”