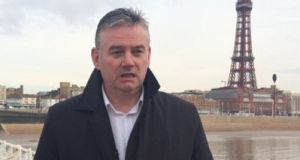 BBC reporter Kevin Magee: allegedly confronted by a group at a coffee shop on Botanic Avenue on February 6th.

Three Belfast men accused of targeting suspected sex offenders and trying to menace a journalist have been banned from any futher paedophile hunting activities.

Prohibitions were imposed on George Keenan (34), Richard Curtis (32), and Tim Heron (28), as they were bailed on assault, false imprisonment and attempted intimidation charges.

They appeared at Belfast Magistrates’ Court in connection with an incident involving BBC reporter Kevin Magee earlier this month.

Mr Magee was allegedly confronted by a group at a coffee shop on Botanic Avenue on February 6th.

Footage of the encounter showed the journalist, who was making a news report on paedophile hunter groups operating in Northern Ireland, then being followed outside as he made his way to a car.

Mr Keenan, of Glenwood Court in the Dunmurry area of Belfast; Mr Curtis from Albert Road in Carrickfergus, Co Antrim; and Mr Heron, of Cloverhill Vale in Bangor, Co Down, are jointly charged with disorderly behaviour on Botanic Avenue and attempting by force, threat or menace to cause Mr Magee to refrain from broadcasting a television interview.

Mr Keenan and Mr Heron are accused of obstruction during the same incident. A series of further charges were put to all three men in connection with alleged meetings with named individuals at a number of locations in Northern Ireland. They included counts of false imprisonment, attempting to cause suspects to leave place of occupation and common assault.

Bail was agreed for each of them on condition that they comply with a series of restrictions.

4 Coronavirus: Number of vaccine doses given in the State passes half a million, Taoiseach says