Senior counsel to review how Department of Justice dealt with tribunal 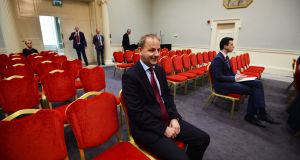 The Taoiseach has appointed a senior counsel to conduct a review of how the Department of Justice dealt with the provision of documents to the Charleton Tribunal.

Michael Collins SC has been asked in particular to review why emails from May and July 2015 were not sent to the tribunal until November of this year.

The emergence of the emails led to the resignation earlier this month of the former tánaiste, Frances Fitzgerald, and almost led to the collapse of the Government.

The appointment was made following consultation with the Attorney General, Seamus Woulfe SC, and involves the review of the practices and procedures employed by the department in response to requests for documents from the tribunal.

Mr Collins, who was formerly counsel to the McCracken (Dunnes Payments) Tribunal, has been asked to use his best endeavours to report to the Taoiseach on or before January 19th, 2018 or at the earliest possible date thereafter.

The tribunal is due to resume public hearings on January 8th next, and will begin with evidence concerning the O’Higgins Commission.

The controversial emails dealt with the legal strategy employed by An Garda Síochána at the private hearings of the commission in relation to Garda whistleblower Sgt Maurice McCabe.

The tribunal is investigating a range of matters to do with Sgt McCabe, including his treatment at the commission and alleged attempts to smear him..

The review to be conducted by Mr Collins will included communications between senior officials and the then minster, Ms Fitzgerald, in relation to the department’s dealings with the tribunal.

The review will set out the facts as found, together with such observations or comments as are considered necessary. It may also advise on what further measures, if any, might be taken to address any concerns arising from the review, according to the Taoiseach’s department.

Pubs not to reopen and restrictions to remain on all gatherings , Cabinet decides 18:39
Court approves €35,000 payment to family of infant who died hours after birth 18:36
Former TV presenter dies after car enters water in Co Down 18:02
Ireland needs to move to ‘zero-Covid’ policy to avoid catastrophe, scientists say 17:48
Coronavirus: 45 new cases but no further deaths reported in the State 17:46