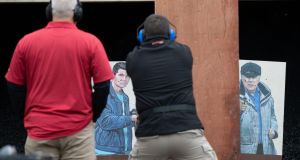 This was the fourth version of the Commanders Counter Marauding Terrorist Attack course put on by the Defence Forces Ordnance School. Photograph: Tom Honan

On Monday morning in the Curragh Camp, a young woman lay screaming on the floor of a small room while trying to hide the hand grenade in her right hand. At first glance, her other hand is no more than a bloody stump – hence the screams. In fact it was a clever prosthetic strapped on over her real, uninjured hand.

She was playing the role of an injured attacker in an exercise, organised and run by the Defence Forces, which simulates a prolonged terrorist attack similar to those suffered by multiple European cities in the last decade.

When the Commanders Counter Marauding Terrorist Attack course was established in the Curragh in 2014 its designers did not know how relevant it would become. Within a few months, in November 2015, Paris was hit by a series of terrorist attacks which left 138 dead. Similar attacks on Berlin, Brussels and Nice followed.

This was the fourth version of the course put on by the Defence Forces Ordnance School. This year members from organisations as diverse as the Prison Service and Dublin Airport Police were taking part alongside gardaí and soldiers. Also in attendance were police officers and soldiers from Austria, Italy, the Netherlands, Spain, Switzerland, Sweden, Qatar and, from the US, members of the DEA and FBI.

On Monday participants went through a series of exercises at the Kildare military facility to evaluate their knowledge and abilities as scene commanders in the context of a terrorist attack. This will be followed by a week of exercises, lectures and real-world simulations of such attacks. Many of these will focus on communication, “an absolutely vital” area, according to the head of the Ordnance School, Lieut Col Neil Kelly.

“Communications is one of the first things to break down in an event,” he said. “There has to be huge communication and instant communication because you have to bring in specialised people who can deal with this threat as quickly as possible, to contain and neutralise it.”

The diversity of personnel and agencies on the course was reflective of the fact that an attack could happen anywhere, he said. “Just look at all the attacks that have happened in Europe so far. They have happened in train stations, in football stadiums, they’ve happened on the shopping streets during Christmas markets. The location can’t be predicated but the response can be prepared.”

On Monday the students’ first exercise involved assessing and treating the injured following a terrorist attack, one of them a civilian and one – the woman with the bloody hand – a terrorist. “You have to treat everyone as a potential terrorist,” one officer explains. “Everyone could be a threat even if they are badly injured.”

Most participants spot the woman’s grenade instantly and carefully pry it from her hand before treating her wounds. However, few find the handgun hidden under her jumper.

“You have to search for weapons at the same time you’re searching for bleeding,” said the officer.

Later, the students were taken to a classroom in the ordinance school where they were instructed to make safe an AKM assault rifle, similar to that an attacker might use. Later, they were tasked with co-ordinating the emergency response to an imagined attack on a church in Co Carlow. For the last stage the group was ferried by helicopter to the firing range for the “dynamic shooting” module.

The helicopter was probably unnecessary; the range only a few hundred metres away. “But it helps with the atmosphere,” said one officer.

Thankfully Ireland has had no experience of a marauding terrorist attack of the type being examined in the Curragh. “This means we have no baseline for it,” Lieut Col Kelly said. But he stressed it was a threat the Defence Forces took very seriously and would continue to train for.