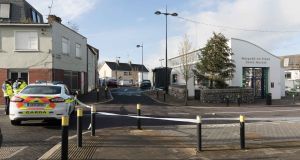 Gardaí at the scene in the Market area of Ennis where Sharon Bennett was found with serious head injuries.

A mother-of-two who was subjected to an alleged serious assault in Ennis last month has died in hospital.

Sharon Bennett (29) died at University Hospital Limerick early on Wednesday morning, 13 days after she was admitted to the hospital.

Ms Bennett, who was originally from Co Wexford, was brought to hospital suffering serious head injuries after allegedly being assaulted in Ennis’s Market area on the evening of Thursday, January 28th.

Supt Brendan McDonagh of Ennis Garda station said gardaí have allocated a level of resources into the investigation to date that would be normally given to a murder investigation.

Supt McDonagh said a postmortem on Ms Bennett’s remains is due to be carried out by Acting State Pathologist, Dr Linda Mulligan.

The Fine Gael mayor of Clare, Cllr Mary Howard said: “It is absolutely heartbreaking to hear that two children will be left without their mother.

“My thoughts and prayers are with her family and her friends who are absolutely heartbroken at this time and I say that on behalf of the people of Clare.”

Patrick Ballard (34) of Ashford Court Hotel, Ennis has been charged with assault causing harm of Ms Bennett and is currently on remand in custody at Limerick prison. He is due to appear again in Ennis court via video link next month.