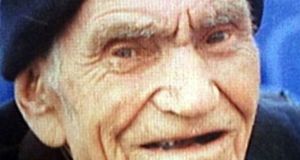 Paddy Lyons: A well-known figure on the roads around the village. Photograph: Provision 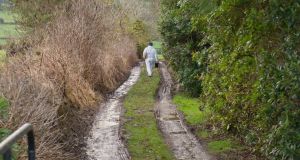 A Garda forensics expert at the remote scene where Paddy Lyons was discovered in his home, near Lismore. Photograph: Michael MacSweeeney/Provision

The murder of bachelor farmer Paddy Lyons in his isolated Ballysaggart farmhouse near Lismore has sparked anxiety among locals living in this tightly-knit community, according to one local.

Treasurer of Ballysaggart Community Alert Tom Veale said people had their worst fears confirmed when it was revealed that the 90-year-old had been murdered.

“There is concern in all the houses around here given what happened and what we just learned. There’s a lot of anxiety here given that Paddy was well known; everyone would know him. And to hear that he was killed in his home will be a huge shock to people,” he said.

Mr Veale said that he knew the late Mr Lyons since he himself was a schoolboy. Paddy Lyons was a well-known figure on the roads around the village as he would often get a lift from neighbours and other locals into Lismore where he did his shopping.

“Paddy was well known. You would see him walking the roads every day, he loved his dancing [and] we have a monthly dance in the community centre and he would always be there. He walked with a bit of a limp and walking stick, but was very sprightly and was well able to get around.

“He was an only child and he never married, so he was the last of his line. He was farming around 30 acres and would have spent all his life in Ballysaggart and he lived alone but he was very sharp and very alert to everything that was going on about him.”

Mr Veale said that people were surprised when Mr Lyons failed to attend the funeral on Saturday morning of 88-year-old local woman Maureen Walsh as he would have known her all his life. And one of her sons used to frequently give him a lift into Lismore.

“He missed the funeral which was unlike him because he would always make the funeral of anyone who died here and he would have known Maureen Walsh all his life. She was 88 so they were around the one go,” said Mr Veale.

“This is a very neighbourly area. Everybody knows everybody else and they know what’s happening here – it’s on the main road from Lismore to Mitchelstown but notice would be taken of strangers passing through and certainly strangers stopping off here,” he said.