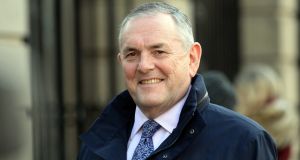 John McGuinness: said Mr Callinan had warned him that Garda whistleblower Sgt Maurice McCabe was not to be trusted. Photograph: Eric Luke

Documents revealed Mr Callinan told Judge Iarfhlaith O’Neill, who was inquiring into the matter, that the meeting did take place.

Mr McGuinness told the Dáil last year that Mr Callinan had requested they meet in January 2014, and when they did Mr Callinan warned him that Garda whistleblower Sgt Maurice McCabe was not to be trusted.

At the time the Public Accounts Committee, of which Mr McGuinness was chair, was about to hear from Sgt McCabe.

Mr Callinan was opposed to Sgt McCabe appearing before the committee.

Mr McGuinness has alleged that when he and the then Garda chief met in a hotel car park on the Naas Road, the purpose of the meeting was to warn him off Sgt McCabe.

However, in the correspondence with Judge Iarfhlaith O’Neill, seen by RTÉ Radio 1’s This Week programme, Mr Callinan said that, while the meeting had taken place, he disputed the descriptions of it now in the public domain.

Mr Callinan told him “there are a variety of descriptions of what occurred at that meeting, none of which are correct”, according to the correspondence.

Judge O’Neill was appointed last year to examine protected disclosures made by the former head of the Garda press office, Supt David Taylor that he had been instructed by senior Garda management to negatively brief the media about Sgt McCabe, who also made a protected disclosure.

However, when Judge O’Neill asked Mr Callinan for comment on the allegations, the former commissioner said he would need to know the specifics of Supt Taylor’s allegations and would require time to gather information and formulate a response.

“You might kindly set out precisely the allegations to which you wish me to respond,” he replied to Judge O’Neill.

“An example of why this is necessary can be ascertained from an examination of the various descriptions of my meeting with Deputy John McGuinness on 24 January 2014.

“There are a variety of descriptions of what occurred at that meeting, none of which are correct.”