Man in 30s arrested over shooting linked to Hutch-Kinahan feud 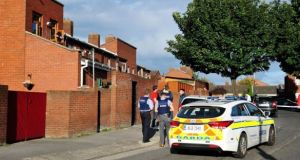 Gardaí at the scene in Drumalee Park off the North Circular Road in Dublin 7, where shots were fired at a house on September 2nd, 2016. File photograph: Aidan Crawley/The Irish Times

A man in his 30s was arrested on Monday in connection to a shooting in Dublin city last September.

The shooting had been carried out at 5.25pm on September 2nd at a house in Drumalee Park, Dublin 7, off the North Circular Road.

A man holding a gun approached a member of the Hutch family on the Drumalee Road.

The target ran into his back garden and then into his home as the gunman fired a number of shots at him.

The man was not injured and the gunman fled the scene in a red car driven by another man.

That car was found burnt out a short time later at Regal Park, near Blackhorse Avenue.

Gardaí at the Bridewell are continuing to investigate the shooting and the arrested man is in custody at the station under the provisions of the Criminal Justice Act 2007.

In February last year, the shooting dead of David Byrne at the Regency Hotel in Dublin sparked a series of murders and shootings as the Hutch-Kinahan feud escalated.