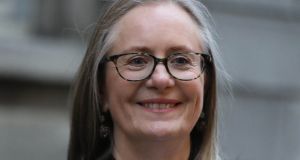 Ms Justice Marie Baker says comments such as those made by Mr Justice Humphreys have no place in a judgment. Photograph: Collins Courts

The Supreme Court has sharply criticised “quite remarkable and personally insulting comments” made by a High Court judge about barristers who had appeared before him.

The comments by Mr Justice Richard Humphreys were contained in a ruling he made last year where he found in favour of a deported Ukrainian man who wanted to be allowed back into the State to make an international protection application that required his presence in the State.

In a judgment issued on Tuesday allowing an appeal against the High Court decision, the Supreme Court said the judge’s comments were “on any view offensive and humiliating and were capable of being damaging to the career of counsel and personally upsetting”.

The ruling was by the Chief Justice, Frank Clarke, and judges John MacMenamin, Elizabeth Dunne, Iseult O’Malley and Marie Baker.

The court said Mr Justice Humphreys had called into question the professional integrity and ability of counsel on both sides in the High Court case, and criticised each of them in different ways.

The High Court judge had made insulting comments “regarding the competence and trustworthiness of counsel for the State, and the professional competence of both senior counsel”, Ms Justice Baker said.

She noted that the counsel in the High Court case, whom she did not name, had been named in the ruling by Mr Justice Humphreys. “It goes without saying that neither had the opportunity to respond.”

The tone in the High Court ruling “may seem to be somewhat flippant or, were it not for the seriousness of the fact that they were contained in a written judgment of a senior member of the judiciary who has considerable experience in the area of immigration, might almost appear to be humorous or satirical”.

“The trial judge may even have meant them in that way. But they must have caused upset and personal and professional embarrassment to the persons concerned.”

Ms Justice Baker said comments such as those made by Mr Justice Humphreys had no place in a judgment.

“The judge is in a particular position of power and can damage or destroy a career with a remark made in court or in a written judgment,” she said.

“It is no part of the judge’s role to be personally insulting to the lawyers who appear before him or her.”

In the judgment the court granted an appeal by the Minister for Justice against the Ukrainian man.

“While I disagree with the reasoning of the trial judge in the present case, his judgment was lucid, reasoned, elegant and intelligent,” Ms Justice Baker said.

It would be a shame, she said, if the erudition displayed in his writing were to be lost in “his more colourful observations which, in my view, are regrettable”.

The issue before the court was whether the Minister was obliged to revoke a deportation order against a Ukrainian man who had been granted consent to make an application for international protection under the 2015 International Protection Act.

However, by the time he was granted consent to make the application, he had been deported.

The man arrived in the State in 2001 and had been given permission to remain. In 2015 he married an Irish citizen. Later that same year he was convicted of sexual assault.

His permission to remain in the State was not renewed in 2016, and in 2018 he was issued with a deportation order. He now resides in Ukraine.

In the judgment, Ms Justice Baker said there was “nowhere found a freestanding right to be given a visa or other means to enter a state lawfully for the purposes of making an application for international protection”.