Inquest hears postmortem results show death was due to hanging 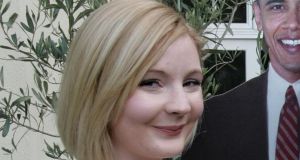 At a resumed sitting of Dublin City Coroner’s Court today, she said postmortem results indicated Ms Fitzgerald’s death was due to hanging.

Professor Cassidy said there were no marks on her body to suggest there was any third-party involvement.

Toxicology results showed the 25-year-old had been taking prescribed medication prior to her death, including sleeping tablets and anti-depressants. She had also consumed a small amount of alcohol.

There was no evidence to suggest Ms Fitzgerald had taken an overdose and all drugs were within normal therapeutic limits, Prof Cassidy said.

Ms Fitzgerald’s family have previously expressed concern over aspects of the the Garda investigation into her death and questioned whether their daughter took her own life. A key aspect of their concern was the fact that a bone in Ms Fitzgerald neck - the hyoid bone - was broken, which often occurs in strangulation cases.

However, Prof Cassidy said it was common for this bone to be broken in hangings. She pointed to a study of 160 cases of hanging by the Office of State Pathologists in which 46 per cent of cases involved the breakage of this bone.

Among cases of strangulation, it is more common again. A study also by her office found this bone to broken in 58 per cent of cases, based on a study of 32 ligature strangulation cases.

Prof Cassidy’s conclusions were based on a postmortem report by another medical expert, Dr Muna Sabah, a consultant histopathologist at Connolly Hospital. She also concluded that Ms Fitzgerald died by hanging and did not find any evidence of bruises or marks to suggest third party involvement.

Mark Harty SC, for the Fitzgerald family, pointed out that Prof Cassidy’s conclusions were based solely on an autopsy report.

She agreed that she would have had even greater certainty in her findings if she had had access to the scene of the death and examined the ligature herself. However, Prof Cassidy added that Dr Sabah’s findings were in line with the type of cases she has previously examined.

Earlier today, two members of the Garda told the court they found Ms Fitzgerald’s body at her rented cottage at Harty Place, Dublin 8, shortly after being called to the scene at 1.40 pm on the afternoon of August 23rd, 2011.

David Healy, a member of the force at the time, said he found Ms Fitzgerald lying on a bed, with two friends, Clare Brady and Brendan Bruen, also in the room.

Mr Healy said he was told they had arrived at the scene earlier and found her hanging in a bedroom. He said Mr Bruen had taken down her body and placed it on the bed, and then loosened a ligature around her neck.

Giving evidence today, Mr Healy said he found nothing untoward about the scene and seized a number of exhibits, including a pink Blackberry mobile phone, a receipt for medication and various other anti-depressant medications belonging to the deceased.

Under questioning by Mark Harty SC, for the Fitzgerald family, Mr Healy said it was his first time dealing with a sudden death scene.

Mr Hartley also asked if the removal of the body from where it was hanging might affect any determination as to how Ms Fitzgerald had died.

Mr Healy responded that, possibly, the removal of the body might influence this.

Rebecca Broderick, solicitor for Mr Healy, pointed out that Ms Fitzgerald’s friends had been advised to take Ms Fitzgerald’s body down during an emergency 999 phone call.

Mr Healy also told the coroner he was unable to recall whether there was a ligature around the deceased’s neck when he arrived at the house, although he did recall seeing one at the mortuary, which struck him as odd.

After questioning from Ms Broderick, he agreed that he had referred to a ligature around Ms Fitzgerald’s neck in a statement he gave to gardai in May 2012, but he said he had since left the force and it was a long time since he had read this statement.

A second garda, Patrick O’Neill, said he examined the windows and doors of the house and found them all to be closed or locked.

Under questioning from Mr Harty, he also said he had never attended a sudden death scene before, but had been trained in protocols around this in the same way as Mr Healy.

He also agreed that the movement of the body would be relevant if the bedroom was being considered as a crime scene. However, Garda O’Neill said there was nothing in the cottage to arouse any suspicion. The garda said he recalled seeing a ligature around Ms Fitzgerald’s neck at the time which had been loosened.