Industrial action due to working conditions, company’s alleged refusal to engage with union 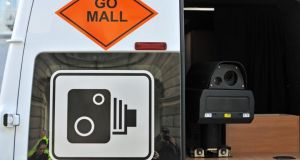 The forthcoming bank holiday strike will last from 9am on Saturday morning to 9am on Tuesday. Photograph: Frank Miller/The Irish Times

Speed camera operators are to go on strike for three days this October bank holiday weekend, Siptu has announced.

It is the second such action by GoSafe speed van staff following a one day stoppage last month.

From Wednesday the workers are also refusing to operate the vans’ Telogis computer system which tracks and monitors their activity. This data is submitted to gardaí and forms part of their contractual obligation for payment, a Siptu representative explained.

The scaling up of industrial action is due to both the working conditions of the operators and the company’s alleged refusal to recognise or engage with their union.

Their forthcoming bank holiday strike will last from 9am on Saturday morning to 9am on Tuesday.

Siptu organiser Brendan Carr explained that van operators work up to 11 hour shifts with no toilet facilities, often bringing in containers to use instead. Their ability to leave the van can also be curtailed for safety reasons.

In relation to the indefinite cessation of the Telogis system, Mr Carr said speeding vehicles could still be detected and fined but overall data would be unavailable to the company.

“They [the workers] are trying to minimise the impact to road safety while at the same time pressurising the company into engaging with them,” he said.

Gardaí said they are monitoring the ongoing industrial action but have not yet addressed the forthcoming strike which was only announced on Wednesday evening.

Ahead of last month’s stoppage, they said up to half of speed cameras would remain in operation and that roads policing would make up the shortfall. It is unclear if similar arrangements will be put in place later this month.

Under the terms of GoSafe’s contract it is required to provide an annual minimum of 90,000 hours of monitoring across 1,031 designated safety camera zones.