Mothers more likely to be victims, in family court cases including violence and threats 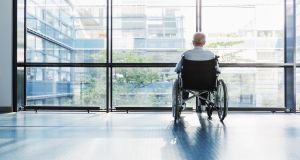 Verbal abuse and threats are the most common forms of elder abuse seen in the family courts. Photograph: iStock

Sons are five times more likely to abuse an elderly parent compared to daughters, according to unpublished research into elder abuse cases in the Family Court.

Mothers are also far more likely to become victims of elder abuse compared to fathers. Verbal abuse and threats are the most common forms of abuse seen in the courts including many instances of threats with knives, according to DCU Assistant Professor of Law Dr Adam McAuley, who carried out the study.

Over the course of a year Dr McAuley visited every District Court family law sitting in the country bar one, including spending eight months in Dolphin House, the country’s busiest domestic violence court.

He recorded 61 cases of parents requesting the court’s protection from their adult children. Parents requested safety orders, effectively warnings to abusers to obey the law, and barring orders which prevent abusers entering a property or approaching the victim.

It is the first time such research has been carried out in an Irish context. Dr McAuley found just 5 per cent of parents had legal representation when applying for a protection order.

However, the vast majority of the applications for protection are successful. In the cases studied by Dr McAuley, the judge refused to grant some form of protection on just three occasions.

Fifty one of the cases (84 per cent) concerned sons who were allegedly abusive towards one or both of their parents compared to 10 cases (16 per cent) involving a daughter.

Dr McAuley said the age of abuse victims ranged from a mother in her late 30s with adult children, up to a woman in her late 80s.

In many cases the victim was caring for the abuser’s child – their grandchild – at the time of the abuse. Nearly a fifth of the cases involved a young child in some way.

“There were also a couple of really nasty ones involving false imprisonment,” he said. “There were a lot of correlations between drug issues and demands for money.”

“Of all the applications I have seen, [elder abuse applications] are the saddest ones because no parent really wants to make an application against their child. But the reality is many are forced into it,” Dr McAuley said.

He said he noted during his research there were significant problems around the serving of barring or safety orders to abusers.

It can often be difficult to serve an order if gardaí do not know where the applicant lives, Dr McAuley said, for example if they are homeless. If a person does not receive an order, they cannot be prosecuted for breaching it.

Some family court clerks have started recommending victims to take a photo of the order on their phone and send it to their abuser. However, it is currently not clear if this is a legally sound approach, he said.

1 The view from Clondalkin: If Sinn Féin don’t get in, ‘there will be marches’
2 Ryanair’s Michael O’Leary under fire for comments on Muslim men
3 Founder of disabilities network with Irish centres sexually abused six women
4 Coronavirus in Europe: Two dead in Italy as fears grow that attempts to contain illness are failing
5 Drug dealer loses codes for €53.6m bitcoin accounts
Real news has value SUBSCRIBE