Drivers must not get behind the wheel when hungover, says AA Roadwatch 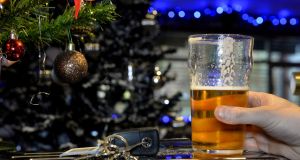 ‘When we speak about drink-driving, most people will assume that we’re only talking about the person who stumbles out of a put at half three in the morning.’ Photograph: Owen Humphreys/PA Wire

AA Roadwatch has issued a warning to motorists to take care not to drive the morning after a night of drinking as their blood alcohol level may not have returned to the legal limit.

In a survey of 6,000 motorists, the Irish traffic news provider found nearly 10 per cent had driven on one occasion in the past year the morning after a night out while still potentially over the legal blood alcohol limit. The study also found nearly six per cent had taken this risk up to five times in the past 12 months.

The group is calling on all drivers to take extra care about driving after a night of drinking during the Christmas and New Year festivities.

“When we speak about drink-driving, most people will assume that we’re only talking about the person who stumbles out of a put at half three in the morning, falls into their car and takes a stupid risk which puts the lives of other road users in danger,” said Conor Faughnan, AA Director of Consumer Affairs. “However, there is another aspect to drink-driving, which is the potential danger posed by people who think that after a few hours sleep and a strong coffee they will magically be ready and able to drive.”

AA Roadwatch research of Irish drivers also found one in 12 had been involved in a near miss or collision involving a driver who they knew or suspected to be over the legal limit.

“You have many people who will do the right thing and get a taxi home after a night out, but then turn around just a few hours later and get behind the wheel of a car without thinking of the fact that they could still be over the limit.”

Any person who wakes up with a pounding head and feeling hungover should assume there is a “strong likelihood” they are still over the legal limit for driving, said Mr Faughnan, adding that the assumption that the body takes an hour to process a unit of alcohol is not always correct.

The impact of alcohol on a person’s ability to drive has been established “beyond all doubt” and the only dissenting voices come from those with a “vested interested in the sale of alcohol,” said Mr Faughnan. “Getting behind the wheel while you are over the limit not only increases your own risk of being involved in an accident, but increases the danger that you pose to other road users who happen to be on the road at the same time.”