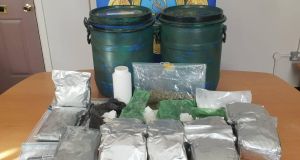 Cocaine seized by the Garda following a search in 2019.

Serious drug dealers and drug mules are almost twice as likely to receive a prison sentence as they were a decade ago.

They are also about twice as likely to receive the mandatory minimum 10-year sentence which legislation says must be handed down for serious drug offences except in exceptional circumstances.

Figures obtained by The Irish Times suggest that, contrary to widespread perception, judges have become more punitive on serious drug offenders since 2011.

Nineteen per cent of the 234 offenders convicted of possessing more than €13,000 of drugs in 2017 and 2018 received a suspended sentence instead of a prison term, according to sentencing data released under Freedom of Information legislation. This figure which has declined every year since 2011/2012 when it was 38 per cent.

By comparison, 58 per cent of those convicted in the Circuit Court of possession of online child abuse material are spared a prison term.

The maximum sentence for possession of more than €13,000 worth of drugs for sale or supply is life imprisonment with the legislation mandating a 10-year minimum term unless there are “exceptional circumstances”.

The legislation was part of a raft of measures introduced in the late 1990s following the murders of journalist Veronica Guerin and Garda Jerry McCabe.

Since then critics have maintained the law unfairly targets low-level mules who are forced to hold drugs by those higher up the criminal ladder.

Calling for the abolition of the mandatory minimum sentence in 2013, the Law Reform Commission said the drugs trade “adapted” to the new sentencing regime “by using expendable couriers to hold and transport drugs”.

Although the law states offenders should receive at least 10 years, save in “exceptional and specific” circumstances, in practice a 10-year sentence is the exception rather than the rule. Typically judges treat factors such as guilty pleas and garda co-operation, as amounting to exceptional circumstances, an interpretation which has been accepted by the superior courts.

However the figures suggest the proportion of offenders receiving the minimum term is increasing.

The average sentence, including suspended portions, across both years was 4.89 years. The average effective prison term was 2.86 years.

The longest sentence handed down in 2017 and 2018 was 15 years which was imposed on Sean MacManus of Baldoyle, Dublin, for his role running a sophisticated cocaine laboratory in Cork.