Traffic disruption strategy to continue for next three weeks 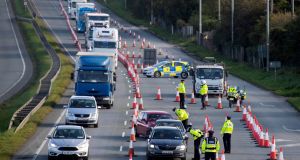 A Garda checkpoint on the N7 at Blackchurch. More than 130 checkpoints were erected on motorways and other arterial routes yesterday around the country. Photograph: Colin Keegan/Collins

Senior Garda officers believe the first day of checkpoints nationwide and resulting traffic congestion was a “sharp shock” that made it clear people should not be travelling outside their home county unless absolutely necessary.

Officers who spoke to The Irish Times were unapologetic about the long traffic jams caused in some parts of the country, saying Garda Commissioner Drew Harris had on Tuesday warned very clearly that delays were inevitable.

The checkpoints, under Operation Fanacht, began again from midnight on Tuesday when all 26 counties in the Republic were moved up to Level 3 of the Living with Covid-19 plan in a bid to stem the worsening spread of the virus.

More than 130 static checkpoints erected on motorways and other arterial routes yesterday morning around the country were switched to the opposite side of the road later in the day. It meant motorists delayed in the morning faced the same disruption in the evening; a strategy that was set to continue for the next three weeks.

Thousands of other mobile checkpoints were also being erected on more minor roads all over the country. Garda sources said motorists planning to avoid main routes in a bid not to be delayed by the Operation Fanacht checkpoints “will be left very disappointed”.

While it has emerged the Government was considering a system of graduated fines for minor breaches of Covid-19 restrictions, gardaí said that was not an issue for them at this point.

They said because the advice to people not to leave their home county was set out in statutory instruments it was, in effect, written in law. And so gardaí were entitled to stop people and quiz them about their movements, even though no penalties arose for those who ignored that measure.

Mr Harris has already said while gardaí had no enforcement role at checkpoints, they were being deployed to “educate” drivers about the need for them not to leave their home county for the duration of Level 3 for at least the next three weeks.

And officers in Garda headquarters running Operation Fanacht believe the presence of gardaí on the roads in a constant high-visibility operation, combined with the long traffic delays on the roads, would be enough to stop most people leaving their home county unless it was essential.

Traffic updates issued by AA Roadwatch from early yesterday reported a queue of vehicles up to 8km on the N7 westbound from J2 Kingswood to J5 Athgoe, where a checkpoint was located.

Other locations where lines of traffic were described as either “very slow” or “very heavy” included the M11-M50 near Bray, Co Wicklow, westbound on the M4 between J5 Leixlip and J6 Celbridge as well as J15 Kiltiernan southbound on the M50 to the Bray-Fassaroe area on the M11, among others.