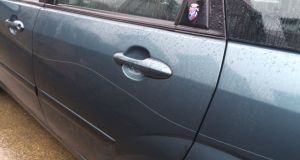 A Senator and vote-counters at the Wexford general election count centre are among victims of an apparently random attack on cars parked near the centre.

About 10 cars - among them one belonging to Kilkenny-based Fine Gael Senator Pat O’Neill - were extensively “keyed” in the attack in the vicinity of St Joseph’s youth centre, where the votes are being counted.

Mr O’Neill said from the damage it appeared a sharp object like a key had been extensively dragged along the front and back panels and both doors on the passenger side of his car.

Mr O’Neill there was no political posters or badges on his vehicle to identify it as belonging to a politician, or him in or particular.

“It was just mindless vandalism,” he said.

The damaged cars were parked on a roadway near the count centre, and not in the centre’s car park, which was full at the time.

“There were no double yellow lines and no continuous white lines. It was not in an area where the Garda had prohibited parking,” Mr O’Neill said.

Count worker Anna Grainger said her car was also scratched, possibly more extensively than Mr O’Neill’s, but on similar panels on the front and back as well as both passenger side doors. “It was totally random destruction - for what?” she also asked.

Gardaí said a complaint had been made and was being investigated.