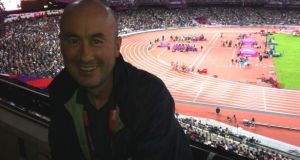 Kieran Creavan pictured in 2012 at the London Olympics. Photograph via Facebook 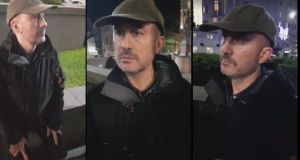 Screenshots of Kieran Creavan as he is confronted on a street in Leeds by a group.

An RTÉ television sports producer has appeared in court in the UK accused of grooming a child for sexual activity.

Kieran Creaven (55), is said to have flown from Ireland to Leeds to meet up at The Queens Hotel with someone he believed to be a 13-year-old girl but which was in fact a fake online identity created by a group that seeks to expose adults trying to contact children for sexual purposes.

Mr Creaven, who is married, appeared at Leeds Magistrates’ Court on Monday where he was charged with attempting to meet a child following grooming. He also faces a second charge of attempting to cause or incite the child to engage in non-penetrative sexual activity.

The court heard the offences were said to have taken place from July 1st - when the defendant first contacted the “girl” - to November 18th when he arrived at the hotel.

There was no indication of pleas.

Mr Creaven spoke only to confirm his name, date of birth and to indicate that he understood the charges. He was wearing a blue denim shirt and blue jeans.

Members of the public in the public gallery shouted at Mr Creaven as he spoke.

Jill Seddon, prosecuting counsel said the accused “has been making contact online with a fictitious female who he believed to be 13-years-old. This is a matter that should be sent to Crown Court to be dealt with”.

Counsel for the defendant made an application to bail his client to his home address in Dublin, where he lives with his wife.

Mr Pritchard said: “While this is a serious offence it is not unusual for defendants to be granted bail in more serious matters. He has never been in trouble before and has never experienced this type of situation.”

Addressing the defendant, Magistrate Rosemary Heslop said she was going to grant bail.

“There is no substantial grounds to believe that offences will be committed. There is no history of failing to attend court. These are the grounds that everyone is entitled to,” she said.

As the magistrates decision to grant bail was read out, the public gallery shouted their disapproval.

Mr Creaven was bailed to appear at Leeds Crown Court on December 19th.

His bail conditions are that he resides at an address in Ireland given to the court, has no unsupervised contact with any child aged under 16 and, if requested by police, to supply any device that is internet-enabled.

RTÉ said the producer has been suspended indefinitely.