Girl (12) killed in beach buggy crash in Co Down

Nicole Fegan (12) from Mayobridge described as a talented musician 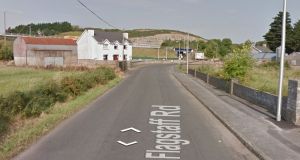 The child was travelling in the buggy when it collided with a black Toyota Hilux on the Flagstaff Road at around 2.50pm on Saturday. Source: Google Street View

A 12-year-old girl who died when the beach buggy she was travelling in collided with a 4x4 has been named as Nicole Fegan from Mayobridge, Co Down.

Police said the child and a 14-year-old girl were travelling in the buggy when it collided with a black Toyota Hilux on the Flagstaff Road in the town at around 2.50pm on Saturday.

PSNI Inspector Kieran Quinn said the 12-year-old, who was a passenger in the buggy, died as a result of injuries she sustained.

The 14-year-old sustained a broken leg and remains in hospital.

The driver of the other vehicle was not injured.

A secondary school student at Our Lady’s Grammar School in Newry, the victim was also described as a talented musician and singer who performed at the final of the South Down Scór na nÓg competition on Friday night just hours before her death.

Tributes have since been paid to the girl on social media, including a post from her local GAA club:

“The Committee and members of Mayobridge GAC are greatly shocked and deeply saddened by the tragic death of our cherished Scór na nÓg member and camogie, football and handball player Nicole Fegan and wish to express our sincere and heartfelt sympathy to her grieving parents Margo and Cathal, brothers Jamie and Jason and extended family circle. Mary Queen of the Gael pray for her.”

The club has also opened a book of condolence.

Local Sinn Féin MP Chris Hazzard described the news as “heartbreaking”, and added that the community in south Down are “thinking of her family and friends at this tough time”.

The girl’s funeral is scheduled to take place in St Patrick’s Church in Mayobridge at noon on Wednesday.

Insp Quinn appealed “to anyone who may have been in the Flagstaff Road area at the time and witnessed the collision to contact local officers in Newry or the Collision Investigation Unit on 101, quoting reference 772 18/11/17.”