Man in his fifties fatally stabbed at house in Co Offaly

Male (17) is arrested after stabbing, and gardaí say they are not looking for anyone else

The death of a man in his fifties in a suspected stabbing Co Offaly on Sunday night is being investigated by gardaí. Video: Collins Photos 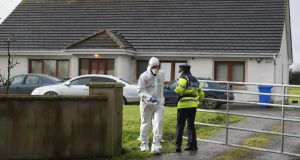 Garda at the scene in Edenderry, Co Offaly, where a man was stabbed to death. Photograph: Niall Carson/PA 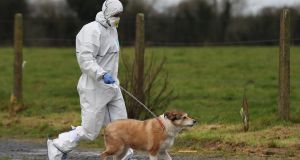 A garda removes a dog from a house in Edenderry, Co Offaly, where a man was stabbed to death. Photograph: Niall Carson/PA

A 17-year-old was last night being questioned by An Garda Síochána about a fatal stabbing in the midlands at the weekend.

The dead man, an Italian national in his 50s, was stabbed in the Co Offaly house where he lived with his partner.

He was named last night as Bruno Rolandi (56) from Monza in northern Italy. It is understood he was a father of two.

In recent years he had been in a relationship with a widowed mother of two and had been living with her at a house in Ballyfore, Edenderry.

It was there that he was found fatally stabbed just before 8pm on Sunday. The teenager in custody last night was being questioned on suspicion of the stabbing.

The alarm was raised just after 7.45pm on Sunday, when the Garda and paramedics were called to the house.

When they arrived at the scene they found the victim with stab wounds.

The paramedics tried to administer emergency treatment but Mr Rolandi’s injuries were too severe.

He was pronounced dead at the scene.

The house was immediately sealed off by gardaí and the deceased’s remains were left in situ overnight.

A pathologist carried out a preliminary examination of the body at the scene early yesterday. Mr Rolandi’s remains were then removed to the Midlands Regional Hospital in nearby Tullamore for a full postmortem examination.

While the results of that postmortem had not been released last night, Garda sources said the man died as a result of stab wounds.

The property where the body was found remained sealed off as the investigation continued. It underwent a forensic examination by members of the Garda Technical Bureau.

Lived in the area Mr Rolandi’s death has caused shock in Ballyfore and the surrounding areas.

The woman he was in a relationship with and with whom he had been living is well known locally. She has lived in the area all her life.

Local councillor Noel Cribbin, who knows the woman well, said people in the community were shocked after the attack that claimed Mr Rolandi’s life.

“It’s a dreadful tragedy to happen. I know the family personally very well and it is a shocking tragedy,” he said.

He said the late husband of the woman in whose house the stabbing occurred had been a librarian with Offaly County Council.

Mr Cribbin expressed his sympathy to the woman’s family and also the family of the deceased man.

Another local councillor, Noel Bourke , said the family in whose home the killing occurred had always been very well regarded.