RSA appeals to ‘weekend warrior’ motorcyclists to ‘ease off the throttle’

Seven bikers killed so far this year, five on a Sunday 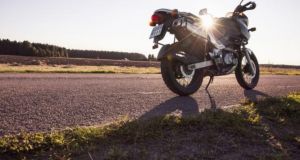 Moyagh Murdock, RSA chief executive: ‘People are on holidays, they are out biking at the weekends and they are sadly engaging in very risky behaviour.’ Photograph: Getty

Five motorcyclists were killed in traffic collisions in the fourth week of July last year, according to figures from the Road Safety Authority (RSA), who have appealed, ahead of the bank holiday weekend, for motorcyclists to slow down.

Moyagh Murdock, chief executive of the RSA, said the problem often lay with what she called “weekend warrior” motorcyclists – bikers who ride for pleasure, and may engage in riskier behaviour such as speeding and drinking before riding.

“Every year around this time we do see an increase in the number of people killed and injured on the roads, and in particular motorcyclists,” she said.

“People are on holidays, they are out biking at the weekends and they are sadly engaging in very risky behaviour,” she said.

“They just take [their motorcycle] out during the fine weather and sadly they do engage in going to the pub on a Sunday afternoon and afterwards think they are fit to ride home and that’s not the case,” she said.

This category of bikers was different to motorcyclists who used their bike to travel to work during the week, she said.

In the run up to the August Bank Holiday Weekend, An Garda Síochána & @RSAIreland are urging motorcyclists to ‘Bike Safe’ during this high risk time for riders. More information is available from the following link: https://t.co/i0Q9hNlY6T pic.twitter.com/F6KThfnBHz

So far this year seven motorcyclists have been killed in traffic collisions, with five fatal crashes taking place on a Sunday.

Motorcyclists riding for a “social outlet” often had high powered bikes, were aged between 25 and 34, and had less experience than those who travelled to work on their bike, Ms Murdock said.

The RSA made an appeal with An Garda Síochána for motorcyclists to “ease off the throttle” ahead of the August bank holiday weekend, where there is often a spike in accidents.

Last year there were 15 serious collisions recorded on Irish roads, resulting in three deaths, over the August bank holiday.

Overall 20 motorcyclists were killed on the roads last year, and eight of the traffic fatalities were single vehicle collisions.

Motorcyclists were “particularly vulnerable” road users, Ms Murdock said, and accounted for over 12 per cent of road fatalities each year.

Assistant Commissioner David Sheahan, who heads the garda national roads policing unit, said the recent good weather had led to a “significant increase” in the amount of motorcyclists on the roads. But there had been no related rise in fatalities, Mr Sheahan said.

Gardaí would be putting extra units on the road and conducting additional checkpoints over the bank holiday, “particularly around night time and on Sunday,” Mr Sheahan said.

“I have been at the scene of an accident where a motorcyclist lost his life, it is not pretty, it is not nice. It is very hard to go back to families afterwards and try to give them the message that their loved one has been killed,” he said.

Research from the RSA found over half of motorcyclists involved in fatal traffic crashes were speeding, and one third had consumed alcohol. The study looked at pre-crash behaviour in road traffic accidents between 2008 and 2012.

To date, 87 people have died in traffic crashes in 2018, which is six less fatalities than the same time last year.