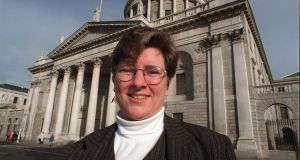 Ms Justice Aileen Donnelly: case was referred over her fears changes to the rule of law in Poland might affect Artur Celmer’s right to a fair trial. Photograph: Alan Betson

The Polish man fighting extradition to his home country will continue to “robustly oppose” his being returned there to face trial when his case comes before the High Court next Monday, his solicitor has said.

On Wednesday the European Court of Justice of the European Union (CJEU), in Luxembourg, said it was up to the High Court in Ireland to decide if changes to the rule of law in Poland were such that the man should not be extradited.

Poland has described a European Court ruling on an extradition case involving a Polish national in Ireland as a “defeat” for the High Court.

The ruling was made in the case of Artur Celmer (31), who is wanted in Poland to face drug trafficking charges. His case was referred to the Luxembourg court by Ms Justice Aileen Donnelly because of fears that controversial changes to the rule of law in Poland might affect Mr Celmer’s right to a fair trial.

The referral of the case was strongly criticised in Poland and has raised questions about the European Arrest Warrant (EWA) system in so far as if affects Poland.

The CJEU ruled that acting on an EWA was not automatic and set out steps for the High Court to follow to establish that the accused faced a “real risk” to his rights.

Marcin Warchol, deputy Polish justice minister, described the ruling as “in line with the position of the Polish government”.

Last March, the Polish government reacted angrily to the suspension of the EWA and viewed Irish court queries about its judicial system as an unwarranted intrusion in its sovereignty.

Mr Warchol described Mr Celmer as a “dangerous criminal”, echoing similar statements by other government officials in the Polish media.

In Dublin, Mr Celmer’s solicitor, Ciarán Mulholland, said in a statement he was in no doubt that there was a very real risk that his client would suffer a breach of his fundamental right to a fair trial if returned to Poland.

“This is clearly evident from the shocking comments that have been aired by government figures against Mr Celmer. These views are clearly in conflict with the concept of the presumption of innocence and the inherent right to a fair and just hearing.”

He said that the response of the Polish government to the concerns expressed by the European Commission about changes to the independence of the Polish judiciary and other matters, “was a clear factor” in the judgment delivered in Luxembourg.

It was apparent from Wednesday’s ruling that the rationale of the Irish High Court in seeking clarification from the European Court of Justice has been deemed meritorious and appropriate.

“I believe that this case has catalysed the debate on the stability and future of the European Union since the Brexit referendum result in the UK. Consequently these landmark proceedings have drawn interest throughout Europe and further afield.”

The CJEU ruling returns the case to Dublin, as Poland’s national conservative government continues with its far-reaching reforms.

It has fired or forcibly retired dozens of judges from both the constitutional tribunal and supreme court and, critics say, used a reformed judicial appointments body to appoint replacements who are supporters or sympathisers of the ruling Law and Justice (PiS) party.

A new disciplinary chamber for the judiciary is presided over by a single judge appointed by the justice minister who, since PiS came to power, is now also the general prosecutor. PiS officials say reforms are designed to break open inefficient and encrusted judicial structures.