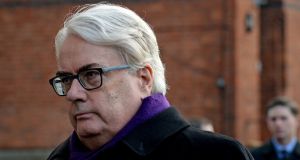 Chief Justice Frank Clarke will be glad to have seen the back of 2020 for reasons extending beyond the coronavirus crisis. It was an annus horribilis for the Supreme Court due to the controversy over Mr Justice Séamus Woulfe’s attendance at the Oireachtas Golf Society dinner in the middle of the pandemic.

This year ­– Clarke’s final one as the State’s most senior judge ­– is an opportunity to restore the court’s reputation and public trust in the judiciary.

The first task is the final resolution of the impasse resulting from Golfgate and the primary responsibility for managing that rests with Clarke, Woulfe and the other members of the Supreme Court.

While the legal world continues to disagree about how the controversy should have been handled, there is a widespread view it has damaged the public perception of the judiciary in general and the Supreme Court in particular. This is likely to have caused special chagrin to Clarke, whose four-year tenure as Chief Justice had until then been going smoothly.

The court was perhaps the most collegial it had been in some time and Clarke was regarded as a progressive Chief Justice, who sought to prioritise the issue of access to justice and to accelerate a programme of reforms under the Judicial Council Act. Other initiatives included “opening up” the Supreme Court by having it sit in major cities outside Dublin and permitting limited TV access.

That legacy has suffered as a result of the controversy, which erupted following the golf dinner at a hotel in Clifden on August 19th, attended by some 80 people. Woulfe, who was appointed to the court just a month earlier having departed as attorney general, said he was unaware of guidelines announced by the Government the previous day, intended to reduce to six the numbers permitted at an indoor event.

Such was the furore that, just two days later, Clarke contacted Woulfe, expressing concern about damage to the judiciary. The resignations of EU commissioner Phil Hogan and minister for agriculture Dara Calleary due to the public outcry over Golfgate increased pressure on Woulfe, who issued an apology but has consistently maintained there was no basis for his resignation.

Former chief justice Susan Denham, who was asked by the Supreme Court to review issues concerning his attendance, agreed. Matters might have rested with her review were it not for further developments, particularly the October 2nd publication of a transcript of Denham’s interview with Woulfe, combined with Woulfe’s reaction to a planned reprimand from the Chief Justice.

A meeting with Clarke under the process was deferred three times at Woulfe’s request until the two finally met on November 5th. On November 9th, a constitutional crisis threatened when Clarke published correspondence exchanged between himself and Woulfe.

Clarke said his personal opinion was that Woulfe should resign but that Woulfe disagreed and had declined to resign. The controversy passed into the political realm until the Government decided on November 17th not to initiate a process to remove Woulfe from office, effectively kicking the ball back to the Supreme Court.

Little appears to have happened since and the court has not publicly specified how it considers the matter should proceed. Its options are limited. Because judicial conduct provisions of the Judicial Council Act have yet to be commenced, it has no power to impose any sanction on Woulfe and its options are confined to the informal resolution process.

The presumption within the Four Courts is that Woulfe, as the process envisaged, will begin work from February. He has been allocated chambers in the Four Courts and a judicial assistant. It is not clear whether another proposed element of the process will be implemented ­– his acceptance of a reprimand by the Chief Justice.

The poor relations between Woulfe and his Supreme Court colleagues add to the difficulties. “It’s an understatement to say some of the judges are not at all enthusiastic about sharing a bench with Woulfe but they accept they have to,” one source said.

“It seems Woulfe will start work gradually and will initially deal with applications for leave to appeal. The fact appeals are being heard remotely as a result of the pandemic might help as it seems likely the judges won’t have to physically share a bench again until well into 2021.”

The fact Woulfe would not be eligible to hear certain appeals as a result of having so recently held the office of attorney general may delay his involvement in significant appeals for some time.

Donncha O’Connell, professor of law at NUI Galway, believes the damage to Woulfe’s standing is probably greater than that to the Supreme Court itself and that a “meaningful gesture” by him would be worthwhile.

“It would probably be best if Mr Justice Woulfe, of his own volition, took steps to address any outstanding issues with a view to moving on and not prolonging the controversy. This could take the form of a statement of atonement and would serve his own interests as a judge with a potentially long tenure on the Supreme Court but, also, the interests of the court itself. Alternatively, a joint statement from Mr Justice Woulfe and the Chief Justice could be issued but I think this is unlikely.”

The Woulfe affair, steering the court through the coronavirus pandemic and advancing the programme of reforms under the Judicial Council Act, including the drafting of guidelines for making and resolving complaints against judges, are just some of the challenges for the Chief Justice as the new year begins.

The October retirement of Clarke, who turns 70 this year, will be preceded in March by the retirement of Mr Justice Liam McKechnie.

Their colleague, Mr Justice Donal O’Donnell, a widely respected constitutional law expert described by one source as a “safe reformer”, is seen as the front runner in the race to succeed Clarke as Chief Justice.

Another Supreme Court judge, Ms Justice Iseult O’Malley, has also featured in the succession speculation as has Mr Justice Gerard Hogan, Advocate General at the Court of Justice of the EU. High Court president Mary Irvine and Court of Appeal president, Mr Justice Birmingham have also been named as possible contenders. Sources also point to a wealth of judicial knowledge and experience on the Court of Appeal meriting promotion to the Supreme Court, including Justices Aileen Donnelly, Una Ni Raifeartaigh, Caroline Costello and Mr Justice Brian Murray.

The Woulfe controversy sparked intense clamour for reform of the opaque system of judicial appointments and for measures to reduce the role played in the process by political loyalties and connections. The new Judicial Appointments Commission proposed by Minister for Justice Helen McEntee, comprising four lay and four judicial members with an advisory role for the Attorney General, has been criticised by some as insufficient to address the problems with the appointments system but Prof O’Connell believes the changes should “go some way towards addressing legitimate and lingering doubts about judicial independence and the separation of powers brought into sharp focus during the Woulfe controversy”.

Whatever the effect of the changes, the Woulfe matter may ensure that judicial appointments will be subject to greater scrutiny into the future.