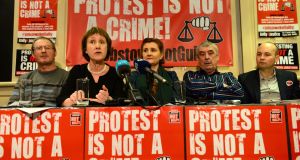 Vincent McGrath, former MEP Patricia McKenna, Annette Woolley, Frank Donaghy and Solidarity TD Paul Murphy at a press conference ahead of the first trial of seven defendants who were found not guilty of the false imprisonment of former Labour leader Joan Burton and her assistant. Photograph: Dara Mac Dónaill

The Jobstown trial involving Solidarity TD Paul Murphy was the most high-profile criminal trial of 2017 in Ireland and was followed by Dáil exchanges that were almost as acrimonious as the infamous Dublin water protest.

The then chief justice Susan Denham was prompted afterwards to comment on the dangers of social media commentary to the jury trial system; the then TD, now Minister of State, Josepha Madigan, introduced a Private Member’s Bill that was directed at that issue; Murphy complained bitterly about the Garda evidence produced at the trial; and the then Garda commissioner Nóirín O’Sullivan announced a review.

The most concrete outcome of the trial, apart from the not-guilty verdicts, was the dropping of further charges against others and the overturning of the conviction imposed on Jason Lester, now 18, of Brookview Close, Tallaght, Dublin 24.

Lester was found guilty in the Children’s Court by Judge John King of the false imprisonment of former Labour Party leader Joan Burton and her assistant at that time Karen O’Connor. He imposed a conditional discharge dependent on good behaviour. That verdict was overturned in the Circuit Court in December. The State did not oppose the appeal.

Likewise, a review by the Director of Public Prosecutions of the trial involving Murphy led to a decision to withdraw charges in pending trials arising from the events at Jobstown in 2014. Only one charge of criminal damage was left standing, which resulted in a conviction when a guilty plea was entered by Dylan Collins (22) of Bawnlea Green, Tallaght. He will be sentenced next month.

In the trial involving Murphy and five others (one had earlier been discharged) the jury took just three hours to deliberate before announcing findings of not guilty, after hearings that lasted nine weeks.

Outside the court building, an impassioned Murphy said that what had happened had been “disgusting”, that Burton had attempted to “criminalise a working class community”, and that the false imprisonment charges were an attempt to “cut across” the “resurgence of the left”.

Referring to the lengthy street and online campaign which had been conducted prior to and during the trial, he said the accused had “won this because of the campaign we had outside of court as well as inside of court”.

Murphy raised the trial in the Dáil and called for a public inquiry into how it had been conducted.

He said he believed gardaí “lied under oath. I think they did so in a co-ordinated way. I think that implies an agreement to commit perjury.”

Taoiseach Leo Varadkar responded by saying he believed Murphy owed a public apology to Burton, her adviser, and to the people who got caught up in the protests where he was a leader.

“You’re not a victim here. You’re not the victim of any conspiracy. You got a fair trial here and you were acquitted. But that doesn’t mean your behaviour was right,” the Taoiseach said.

“And it may well be the case that you weren’t engaged in kidnapping but it was thuggery and your behaviour was wrong. The protest was ugly, it was violent, it was nasty.”

Murphy said it was a matter of public interest if gardaí had given false evidence under oath and questioned the idea of the gardaí holding an inquiry. “It was completely illogical to ask senior gardaí to investigate whether their members co-ordinated perjury to try to get prosecutions in the first place and to proceed and to try to stitch people up for false imprisonment,” he said.

After the further false imprisonment charges were dropped, Burton went on RTÉ radio and said politicians should not have to accept the sexist and horrific personal abuse she’d had to endure on social media during the trial. In another era some of the language used would have been described as hate speech.

Murphy had got a great deal of publicity from the trial but the people of Jobstown had to live with the notoriety attached to the name, she said.

The experience of those few hours when she was in Garda cars surrounded by protesters was not something she would like to see others have to go through, Bruton said.

“For myself and Karen those three hours, in two cars with the crowd banging on the car, will remain with us,” she added.

The Garda review of the episode is into “the policing response and the subsequent investigation into the incident” at Jobstown, rather than into the evidence presented during the subsequent court case.

This is despite the fact that at one stage Varadkar suggested it should include the evidence given at the trial.

The outcome of the review has yet to be disclosed and a request for a comment from the Garda Press Office had met with no response by the time of going to press.