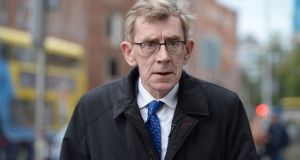 Senior counsel and law lecturer Tom O’Malley was asked to carry out the study in August 2018. Photograph: Dara Mac Dónaill

A report on the treatment of victims of sex crime which was commissioned in the aftermath of the 2018 Belfast rape trial is expected to be published in the coming weeks following a delay of more than a year and a half.

Senior counsel and law lecturer Tom O’Malley was asked to carry out a study of the matter in August 2018 by then minister for justice Charlie Flanagan, shortly after rugby players Paddy Jackson and Stuart Olding were acquitted of raping a woman at a house party in Belfast.

The trial led to calls on both sides of the Border for drastic reforms in the treatment of complainants in rape and sexual assault cases.

A report commissioned by the Northern Ireland government was completed in May 2019. It made 253 recommendations including restricting public access to rape trials and free legal aid for complainants.

The report commissioned by the Irish government was originally due by the end of 2018 but has been delayed multiple times.

A Department of Justice spokesman said this week it understood “the report is almost complete” and it would be presented to Minister of Justice Helen McEntee “very shortly”.

It is understood officials expect the report in the next two or three weeks, and that it will recommend extensive reform of rape and sexual assault trials.

The implementation of the recommendations will be one of the first major tasks of Ms McEntee who was appointed as Minister last weekend. The report is expected to be put before Cabinet “for information purposes”, a source said.

The delays have been caused in part by an unexpectedly large number of submissions received by Mr O’Malley from parties including rape crisis organisations, lawyers and victims of sexual assault.

The report is expected to address whether complainants should receive their own legal representation throughout the trial process and whether judges and lawyers should receive specialised training in the area.

It will also examine the issue of anonymity surrounding sexual crimes. Currently defendants accused of rape are granted automatic anonymity but those accused of sexual assault are not, an issue raised in the recent prosecution of comedian Sil Fox.

Mr Fox was named publicly after being charged with sexually assaulting a woman in a restaurant. The charge was subsequently dropped after a judge ruled it was not supported by the evidence. He is suing the State over the prosecution.