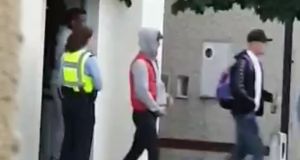 Footage online shows gardaí clearing up to 60 people from a house party in Waterford city on Saturday.

The Mayor of Waterford, Damien Geoghegan, has called the people who attended a house party over the weekend “grossly irresponsible”. Footage has emerged online of gardaí clearing up to 60 people from a house party in Waterford city on Saturday.

Gardaí were called to the three-bedroomed semi-detached house in Briot Drive at 8.35pm. Video shared on social media shows the young people being escorted from the house through the front door.

Mr Geoghegan told Newstalk Breakfast on Thursday such behaviour was unacceptable. He said he understood young people wanted to meet with their friends and that was okay if they kept it to a small circle of friends.

“These people didn’t all know each other,” he said.

House party in a 3 bed house broken up by Gardai in Waterford yesterday. I counted at least 50 people coming out. If it wasn't so dangerous it would actually be funny. This is how the 2nd wave starts. pic.twitter.com/3zgiuDJtrS

Locals in the area were very shocked at the incident, he said. Waterford has a low rate of infection of Covid-19 to date. “We’re very proud of that. But to see a scene like that, people are shocked and angry,” Mr Geoghegan said.

People have got to remember that although restrictions may have been lifted the virus has not gone away, he added. “We will see spikes. To see over 60 people in a house like that is unacceptable.”

Mr Geoghegan said his message to young people is to continue to be vigilant and to act responsibly. “Covid hasn’t gone away,” he said.

A Garda spokeswoman said: “Following reports of a disturbance at residence, gardaí in Waterford responded to a call at a location in Briot Drive at approximately 8.35pm on Saturday.

“A number of people were asked to leave the area. All complied.”