Data Protection Commissioner to begin investigation into such projects next month 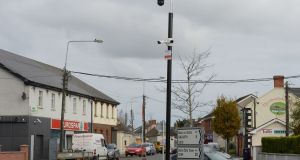 The Department of Justice is continuing to provide funding to local authorities for community CCTV schemes despite the Data Protection Commissioner announcing an investigation of such projects.

Under the initiative, the department will meet up to 60 per cent of the cost of installing CCTV cameras in an area, up to a maximum of €40,000.

So far it has received 25 applications from interested local authorities, including 14 in the last month.

Four applications, totalling €120,000, have been approved so far while another 18 are under consideration, according to the Department of Justice. Three have been returned to the applicants so they can provide more information.

There are currently 35 Garda CCTV schemes in operation around the country comprising of 500 cameras. There are another 45 community-based CCTV schemes, comprising of 376 cameras, which were funded under previous Department of Justice grant-aid schemes.

The Garda Commissioner may authorise the installation and operation of CCTV under community-based schemes for the “sole or primary purpose of securing public order and safety in public places”.

Privacy concerns have been raised about the schemes such as one in Duleek, Co Meath, which was rolled out last summer with more than a dozen hi-tech cameras, including ones with automatic number plate recognition.

There is another proposed scheme for 14 towns in Limerick comprising a “smart” CCTV system which will be linked with data from environmental and footfall sensors, and number plate recognition.

Data Protection Commissioner Helen Dixon announced an investigation into such CCTV schemes earlier this year. The investigation is due to begin next month following the completion of a “scoping exercise.”

A spokesman for the commissioner told The Irish Times there was nothing to stop the current scheme being expanded while the investigation was ongoing.

However, some local authorities have paused their applications for funding because of concerns over who will act as the “data controller” for such schemes.

Under the terms of the scheme the local authority must act as data controller meaning it would be responsible for the proper storage and use of the data and for making sure General Data Protection Regulation (GDPR) requirements are met.

Last Month, Kilkenny County Council, which is one of the local authorities to pause their application, heard some authorities wouldn’t have the resources to act as data controller, especially if they have to oversee multiple schemes.

“The role of the data controller is quite complex. A number of local authorities wouldn’t have capacity to act as data controller for multiple sites. It would require consultation with IT and the General Data Protection Regulation officer [at the council],” said the council’s director of services, Mary Mulholland.