Murder in Cork is a violent tale with a Gothic setting 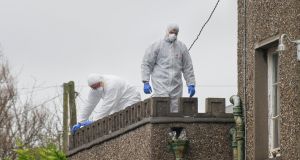 A Garda forensic team examines the scene at Castlegreina House on the Boreenamanna Road, Cork, where the body of the man was found. Photograph: Daragh Mc Sweeney/Provision

The castellations of Castlegreina House stood out as dark silhouettes as dusk fell on Boreenamanna Road in Cork on Sunday evening.

Located at the city centre end of the busy artery to Blackrock and Mahon, the 19th-century house could hardly have provided a more Gothic setting for one of the most gruesome murders in Cork in years.

Gardaí were alerted at 4.10pm on Saturday when a local man went looking for his cat in the grounds of the unoccupied house only to find the naked body of a man, minus his head and arms, shoved under a bush in the back garden.

Investigators immediately cordoned off the scene and Garda technical experts began an examination. Late on Saturday night, they found the man’s head and two arms a short distance away from his torso.

The man’s dismembered body remained at the scene overnight, sheltered from the elements by a Garda crime scene protection tent, and the remains were examined at the scene on Sunday by locum State Pathologist Dr Heidi Okkers.

Det Supt Mick Comyns refused to be drawn on the nature of the man’s injuries at a media briefing outside Castlegreina on Sunday afternoon, but he confirmed gardaí had been called months ago over complaints of anti-social behaviour at the site.

He said that people had started drinking in the grounds of the unoccupied property but gardaí had dealt with the issue and there had been no complaints regarding drinking on the property in more recent weeks.

Locals say the house, which dates from 1892, has been derelict for more than a year since the previous occupant, an elderly lady, who lived alone there, went into a nursing home, and that it had recently been frequented by homeless people.

One local told The Irish Times “a lot of homeless people have been going into . . . the grounds there [to drink] in recent times and only a few months back gardaí caught two guys on the roof of the house”.

It is understood the house itself is securely boarded up but access to the grounds can be gained relatively easy. There is no lock on a door for the surrounding wall so people can enter the property from the street.

Gardaí began door to door inquiries on the Boreenamanna Road and in the nearby Rockboro Avenue area and they have also begun harvesting CCTV footage from the area, which is less than 2km from Cork city centre.

Gardaí began liaising with those providing services to the homeless in Cork on Saturday evening, including Cork Simon, which runs a residential centre on Boreenamanna Road, to see if any homeless person has been reported missing.

Det Supt Comyns, of Anglesea Street Garda station, appealed to anyone who may have noticed any suspicious activity at the site in recent days to contact gardaí in confidence.

“I would reassure people that anyone who has any information and comes forward to assist us that they have nothing to fear and anybody who has a fear can contact the Garda Confidential Line and speak to us in confidence.

“And I can reassure people in the area we have a full investigation up and running – this is normally a very quiet area but we have local patrols in the area and we have a lot of uniform gardaí carrying out door to door inquiries.”

Anyone who noticed any suspicious activity in the Boreenamanna Road area since Christmas Day is asked to contact the Bridewell Garda station, where gardaí have set up an incident room, on 021-4943330.