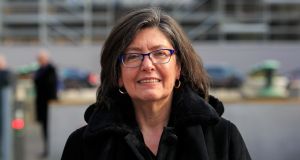 Chairwoman of the Policing Authority Josephine Feehily said she would not accept data on homicides from the Garda unless it was approved by the civilian analysts. Photograph: Gareth Chaney Collins

The Policing Authority has strongly denied suggestions it failed, or even ignored, two Garda civilian whistleblowers who came to it last year seeking to raise serious concerns about a cover-up in the force over homicide statistics and investigations.

It has also now emerged that of 41 domestic homicides committed between 2013 and 2015 that were flagged for further checks, only 13 were found to be properly classified.

It has been known for some time that of the 41 cases, 12 had not been originally classified as homicides and needed to be upgraded to that status.

However, the Policing Authority has also now revealed unspecified other changes needed to be made to the classification of 16 other cases. It means only 13 of the 41 cases were found to be classified properly in full when examined closely.

Chairwoman of the Policing Authority Josephine Feehily yesterday answered questions at the Oireachtas Committee on Justice for over four hours about how her agency responded when senior Garda analyst Lois West made repeated contact with the authority last year. She tried several times, but ultimately failed, to secure a meeting with the authority last spring.

News that two civilian Garda analysts had turned whistleblower over homicide data was revealed by The Irish Times last month, including concerns being expressed by the women about their treatment at the hands of the Policing Authority.

Ms Feehily yesterday said while Ms West previously told the Oireachtas Committee on Justice she felt let down by the Policing Authority, this was not true.

And Ms Feehily also took issue with an allegation by Ms West which suggested the authority had both ignored her and then told senior Garda officers that she had been contacting the authority with sensitive information about errors in the homicide data.

Ms Feehily said it was known within Garda Headquarters that Ms West had contacted the authority. Indeed, she said a senior Garda officer had given her the contact details for the authority.

The Policing Authority last March became aware, via intelligence from an anonymous source, that a dispute had emerged between senior Garda management and civilian members of the Garda Analysis Service over the issue of mistakes in homicide data.

The authority, Ms Feehily added, was also aware at the time that a body of research had been conducted into homicide data that had not been made available to her and her colleagues on the authority.

And while Ms West may not have known it at the time, she was not the only person contacting the Policing Authority supplying information and expressing grave concern about the homicide data controversy building in the Garda.

Ms Feehily said she was also aware that information presented to her agency had not been signed off on by the Garda civilian analysts.

Ms Feehily told the committee yesterday that phone calls and a letter outlining information and concerns were received from Ms West several times, beginning last April. All of the information was acted on and Ms West was assured it would be acted on.

And Ms Feehily also said she had repeatedly told senior Garda management she would not accept data on homicides from the Garda unless it was approved by the civilian analysts. She pointed out that when a report was presented to the authority last April, she rejected it as inadequate.

Ultimately, senior Garda management was forced into a climb down. After 15 months of dispute with Ms West and Ms Galligan, Garda officers agreed last summer that their way of classifying homicides was correct.

A major review now being carried out is being conducted under the crime counting rules set out by Ms Galligan and Ms West.