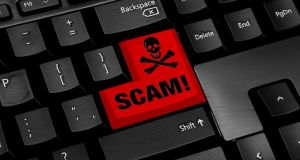 Police in Northern Ireland have warned of several scams in which people have been tricked or blackmailed into handing over money.

It follows 24 such reports in the past two days in counties Armagh, Down and Antrim.

“We are reassured that people are able to spot these scams, and people are picking up the phone to report them to us,” said Chief Superintendent Simon Walls in a statement on Wednesday.

“However, we would continue to urge members of the public to always err on the side of caution with any text, call, email or letter asking for payment or personal details in order to release money, refund fees, pay lottery wins or supply a holiday, giveaway or service.”

The most recent scams have included phone calls and automated messages from people claiming to be customs officials and threatening prosecution unless unpaid taxes are forwarded.

Another scam, which has emerged in recent weeks, informs people that unless they pay over bitcoin a video of them viewing footage of a sexual nature, and obtained from malware in personal computers, will be posted online.

Targets are often instructed to purchase Apple iTunes gift card vouchers and to read their codes over the phone, an approach that makes the financial exchange impossible to trace. Fraudsters can recoup the money with the code and do not need the actual gift card.

In one incident a man was contacted by someone pretending to be from BT who said the “internet had been hacked” and requested access to his account.

Scammers often tell their targets they are due a refund of some kind and require their bank account details in order to process it.

“Our advice is always be wary of any individual who cold calls you. Don’t allow any cold-caller remote access to your computer,” said Chief Supt Walls.

“Be especially suspicious of anyone who asks for personal details, money, banking or credit card information via the telephone. Once a scammer is in a victim’s computer and personal details are given by the victim, their online bank accounts can be accessed and significant amounts of money lost; money they may well never get back.”

Maureen O’Hara statue ‘not a good likeness’ as refund given – FOI 20:43
Flooding ‘not an issue’ at most bog rewetting sites, committee told 20:32
Martin signals aim to bolster social dialogue arrangements 20:29
Man jailed for violent robbery of drunk victim in late-night attack 20:24
Offaly man jailed for sexually abusing a teenager he met on Snapchat 20:02