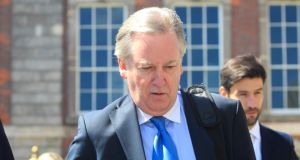 The crime journalist Paul Williams has rejected as “completely untrue” the position of the former head of the Garda press office in relation to Sgt Maurice McCabe. He told the Disclosures Tribunal that he was never negatively briefed against the Garda whistleblower.

Williams said that after interviewing the woman known as Ms D about her allegation that Sgt McCabe had sexually abused her in 1998, when she was a girl, he checked the details with Supt David Taylor, who ran the press office.

Williams has told the tribunal, which is investigating whether a smear campaign was run against Sgt McCabe on the direction of senior Garda management, that he was in touch with Supt Taylor a number of times and submitted questions that the garda later responded to.

The journalist said that among the information confirmed, off the record, was that there had been an investigation in 2006 into Ms D’s allegation and that the director of public prosecutions had decided not to bring proceedings.

But John Ferry, for Supt Taylor, said that there had been only one telephone call, from Williams the day he interviewed Ms D, in 2014, and that Williams had said he was in Ms D’s house.

Supt Taylor said Williams told him that he had just spoken to Ms D, that Sgt McCabe had destroyed her and that he was going to write an article that would be very damaging to Sgt McCabe. Supt Taylor said there were no subsequent phone calls on the topic.

Williams told the tribunal’s chairman, Mr Justice Peter Charleton, that he never had a conversation with Supt Taylor of the nature alleged. When the chairman asked if it was the case that he had not asked Supt Taylor to confirm anything, Williams said that was “totally untrue”.

According to Mr Ferry, Supt Taylor had said nothing to Williams during the one telephone call about Sgt McCabe, after which he wrote down what he had been told and texted the information to the Garda commissioner at the time, Martin Callinan, and his then deputy, Nóirín O’Sullivan.

Williams said that he did not call Supt Taylor the day he interviewed Ms D but that he did call him later and had several subsequent conversations about the matter. He said he did not see the logic in the suggestion that he called the Garda press office to make a statement to Supt Taylor rather than to confirm the account Ms D had given him. “I rang him to clarify details. That’s it.”

Not a Garda puppet

He told the chairman that his editorial judgment was not compromised by his closeness to senior Garda management, that he was never part of a smear campaign and that a claim he had seen the full file on Sgt McCabe was absolutely untrue. There was “no basis” to any claim that he was a puppet for senior Garda.

Det Supt John O’Reilly said he was “flabbergasted” when he heard that Ms D, in an interview with the Garda Síochána Ombudsman Commission, had said he told her father that Sgt McCabe had been hanging around a girls’ school, watching the pupils come out. “I neither said it nor have I any knowledge of it,” he told the tribunal.

Det Supt O’Reilly said he was friendly with the McCabe family and with Ms D’s family. He had not suggested that Ms D’s father contact Paul Williams, although he did give him the journalist’s telephone number. He said he regretted getting involved, as friendships had since deteriorated.