Party host could be liable if visitor gets Covid-19, says barrister 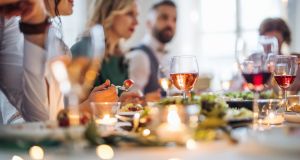 People who hold gatherings in their homes against social distancing guidelines could be liable for damages if someone contracts Covid-19, according to barrister Tony McGillicuddy. Photograph: iStock

People who host house parties in contravention of Covid-19 guidelines could be liable for damages if an attendee is later found to be carrying the virus, a leading barrister has said.

Current public health guidelines limit gatherings in private homes to no more than six visitors from three other households. Penalties have been proposed in a bid to ensure greater compliance with the guidelines and to curb the rise in coronavirus cases.

Cabinet on Friday decided to make holding a gathering of more than six people a “civil offence” rather than a criminal one, which gardaí would have no role in policing.

Speaking on Sunday, barrister Tony McGillicuddy said section 43 of the Health Act 1947 outlines how householders could be liable for damages should an attendee at their property later be found to be carrying the virus.

“If there are requirements for a person to take certain precautions to avoid Covid or other infectious diseases, and if they don’t do so, and if a person who has been in their house becomes infected with Covid, that person who has attended as an invitee of their house could sue them for damages,” he said on the This Week programme on RTÉ Radio 1.

“It would be presumed in law that they had obtained the infection from attending at the household unless the householder could prove otherwise.

“You could have a situation where the Government will say we’re not going to impose a criminal sanction, but if you invite more than six people into your house of a night, and if one of them subsequently finds they have Covid, they could sue you.

“I think if members of the public knew that that presumption in law could act against them in such a scenario, that might have its own coercive effect on organising house gatherings.”

Antoinette Cunningham, general secretary of the Association of Garda Sergeants and Inspectors (AGSI), said it would not be possible for the Garda to police house parties.

“Any attempt to introduce law for gardaí to enter into private dwellings is fraught with difficulties,” she said. “We don’t see how it can be practically implemented by our members. We do not have the right to go into a person’s private dwelling.

“Unrealistic expectation is placed on members of the Garda by public commentary from people like government or legislators who say these laws can be introduced, but they never think about the final piece of it which is how are they going to be practically enforced.”

In relation to greater enforcement around the restrictions on pubs, Ms Cunningham called on the Government to consider any new laws carefully.

“If there is a proposal to introduce new legislation, can the Government please think about the enforcement part of that,” she said. “Winter is coming. We know in a TV programme the meaning behind that phrase was of constant warnings and vigilance that was needed.

“We don’t live in a climate where it is practical to dine outside in winter time, so that’s going to move people indoors. Is it going to create difficulties in relation to social distancing? Is it going to mean bigger crowds inside in pubs?

“The Government should look at the legislation they introduced and see if it’s enforceable, that it’s practical, and that it’s serving society well, and if not, should they consider reviewing it.”

The Government is expected to bring more legislation in relation to the matter before the Dáil next week.