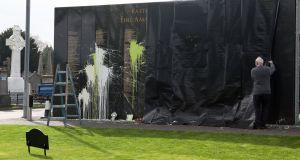 Vandals have thrown paint over the remembrance wall erected last year in Glasnevin Cemetery, Dublin, to mark the centenary of the 1916 Rising.

The trust, which operates the historic graveyard, has said it is in contact with gardaí about the incident.

The so-called “necrology wall” bears the names of all who died in the rebellion, Irish and British, military, police and civilian. The names are displayed chronologically, and alphabetically within each date. The decision to include the names of all who had died was a cause of controversy last year.

Staff noticed the damage, which covers a significant section of the wall, when they came into work on Sunday morning. The paint is not confined to any category of deceased.

A spokesman for the trust confirmed that the wall was defaced during Saturday night.

“This was an act of callous vandalism. Glasnevin Trust is currently engaging with the gardaí on the matter and will not be commenting further at this time.”