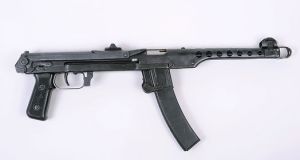 A 14-year-old boy from the north Antrim area allegedly left school at break-time to attend a meet-up in a Coleraine retail park about buying a sub-machine gun and ammunition, a court has heard.

A police officer said the authorities were monitoring an attempt to acquire a “live” firearm through the “dark web” and after obtaining covert evidence an “operative” was in place when the boy, who cannot be named because of his age, attended and was arrested.

The officer alleged the accused had £150 cash on him to buy 100 rounds of ammunition and the teenager believed he could also purchase a sub-machine gun.

She alleged the accused said he wanted to “intimidate a third party” with the gun.

“He got out of school to perform this meeting at break time,” the officer told Ballymena Magistrates Court on Saturday morning.

The boy has been charged with attempting to possess a PPSh43 sub-machine gun and 100 rounds of ammunition with intent to endanger life between March 23rd and April 7th this year.

The child was arrested in the Riverside Retail Park in Coleraine on Thursday appeared at court on Saturday with two police officers standing nearby.

He is one of the youngest people to ever be brought before the adult court in Ballymena.

The teenager, who was wearing a grey hoodie and black tracksuit bottoms, was allowed to sit outside the dock beside his father in court. The child confirmed his name, age and address and said he understood the charge.

The police officer told the court she believed she could connect the accused to the charge. She said she was opposed to bail and said when cautioned the boy claimed he was “asked to pick up the package”.

The officer said the teenager told police a Jamaican man he had known for a year and had met around 15 times had asked him to pick up a “deactivated” gun.

The officer said: “The evidence was that it was in fact a ‘live’ gun and ‘live’ ammunition”.

The officer said she believed if released there was a risk of harm to others and said the account about a Jamaican living in Northern Ireland whom the accused said he knew through Facebook was “somewhat unbelievable”.

The officer said the accused’s Facebook was checked and said a laptop was seized from the boy, but she believed it was possible to remotely delete conversations from an app.

Defence solicitor Derwin Harvey said when originally charged there had been no mention of the ‘intent to endanger life’ and he said there was no evidence whatsoever to support any notion of intent.

The boy’s father told the court he could strictly monitor bail conditions.

District Judge Liam McNally said he was satisfied there was a risk in the case, but because of the boy’s age he wanted to release him on stringent bail conditions and he believed any risk could be contained. He said it was a very serious charge and if found guilty the boy could be sentenced to life in prison.

The boy was released on £500 bail to appear at Coleraine Magistrates Court on April 24th.

His conditions include residing at his home address; a 10pm to 8am curfew; a ban from having any phone or computer which can access the internet and he has to sign in and sign out of school.

Judge McNally told him if he breached bail by “dabbling in the internet” he would be remanded in the Juvenile Justice Centre until the case goes to court which could be more than six months away.

Joe Biden sworn in as 46th president of the United States