Fergal Gaynor has been working on international criminal justice since 2001 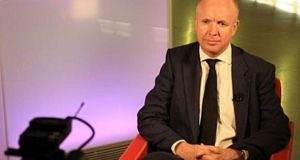 Fergal Gaynor: has been working on international criminal justice since 2001.

An Irish lawyer is one of three people in contention for what is considered the most influential position in the area of international criminal justice.

A vote is to take place on Friday to decide who will be the next holder of the highly-sensitive position of Prosecutor of the International Criminal Court (ICC) in the Hague, which prosecutes those alleged to have committed war crimes.

An attempt over recent months to decide by way of consensus between Fergal Gaynor (49), and the Spanish and UK contenders for the position was abandoned earlier this week and a decision was taken to decide on the post by way of an election, which is to take place this Friday.

It is the first time the position, which has previously been filled by way of consensus, is to be filled by way of a vote. The previous two holders of the office were from Argentina and Gambia.

The nine-year role is a highly sensitive one, with the court having been criticised by some African politicians in recent years for its alleged undue focus on that continent.

“The court is both very popular, and very unpopular.”

There is near universal support for the idea of accountability for atrocities “but the minute you start putting that principle into action, that’s when you meet resistance, because people say, you are targeting us because of our race, our religion, or whatever.”

Mr Gaynor, who was born in Malawi and studied law in Trinity College, Dublin, has been working on international criminal justice since 2001.

Among other roles, he has served on the teams that prosecuted leading members of the Bosnian Serb leadership, the Khmer Rouge leadership, and the Interim Government of Rwanda.

The ICC is the world’s only permanent international criminal court. Preliminary inquiries are currently ongoing on matters affecting Russia (in Ukraine), the US (in Afghanistan), and Israel (in Palestine).

Russia, the US and Israel are not signed up to the jurisdiction of the court. China, India, and Pakistan also do not subscribe to the court’s rule.

The matters being looked at in Afghanistan could involve the actions of US forces there, including members of such bodies as the Central Intelligence Agency.

The court has decided recently that it has jurisdiction over the State of Palestine, a decision that has outraged the Israeli government. The situation in Ukraine could involve crimes by Russian citizens.