‘Online threats’ to garda over housing protest to be investigated 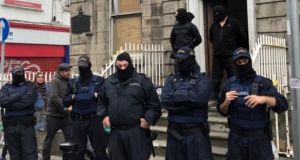 Gardaí are investigating online threats made against a member of the force involved in policing a protest which followed the repossession of a Dublin property that activists were occupying.

Men wearing black balaclavas last Tuesday repossessed 34 North Frederick Street, which activists from the Take Back the City protest group had been occupying since mid-August.

The masked men worked for a private firm acting for the owner of the premises, Patricia Ní Greil, who had obtained an injunction against the protesters on August 28th. Four activists inside left the building soon after the balaclava-wearing men entered it.

While the men secured the building, gardaí from the public order unit stood outside the property, to prevent activists from interfering with the repossession.

Photographs of gardaí wearing hoods to cover their faces drew criticism on social media. Five protestors were arrested during clashes with gardaí, where batons were used on demonstrators.

On Friday one of the hooded gardaí was identified on social media, with pictures of the garda in his normal uniform shared in a Facebook post. Several abusive comments were made under the post. The name and images of the garda were reposted by several other Facebook pages.

An Garda Síochána said on Sunday that it was “investigating online threats made against a Garda member working in Dublin”.

“Appropriate supports have been put in place by Garda management to protect the welfare and safety of the Garda member,” a spokesman said.

“Threats and intimidation against Garda members who are only doing their job to keep people safe and uphold lawful order are completely unacceptable,” he said in a statement.

Earlier in the week Mr Harris said the use of fire retardant hoods by gardaí during the operation was “not correct,” as uniform policy states they should only be worn with protective helmets. Mr Harris also condemned alleged racial abuse directed at a garda during the protest.

A report will be carried out into the garda response to the protest by Assistant Commissioner for the Dublin region Pat Leahy.

Minister for Justice Charlie Flanagan said the online abuse “serves to highlight the challenges facing Gardaí in upholding the law,” and were unacceptable. “I expect the matter will be fully investigated by Gardaí,” he said.

Fianna Fáil spokesman for justice Jim O’Callaghan TD echoed the concern over the “sinister and threatening posts on social media.”

In a statement Mr O’Callaghan said “anyone seriously threatening violence against a member of An Garda Síochána, or indeed any member of the public, needs to be investigated and charges need to be brought if appropriate.

“This will require cooperation from social media companies who can no longer continue to hide behind the fiction that they are not joint publishers of these threats,” he said.

A spokeswoman from Take Back the City said the group condemned the personal attacks on gardaí on social media.

The posts were from “different groups” who were not connected to the housing activists, and the abusive comments were “not things [WE]would agree with.

“We can’t really control what other groups say online. We do not agree with racial abuse or personal attacks on individual gardaí,” she said.

Take Back the City have been behind a string of occupations of vacant property in Dublin city in recent weeks, to protest the housing crisis. The group are currently occupying 41 Belvedere Place, despite the owner of the property applying for a High Court injunction to require occupants to vacate the building.

The Facebook page which made the original social media post did not respond to queries. Another page that shared the pictures and name of the garda responded to queries to state “the garda in question deserves all the flak he gets”.

The individual behind the page refused to identify themselves, before going on to refer to The Irish Times as “a f**ken rag”.