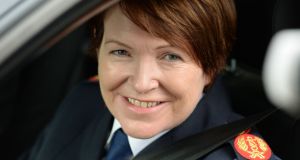 The Government and the Garda force were caught by surprise on Sunday after the unexpected resignation of Nóirín O’Sullivan, the second Garda commissioner to step down in 3½ years.

Ms O’Sullivan retired from the force without serving out a notice period after a near three-year commissionership dogged by controversies.

Her announcement came as a surprise even to those she worked closely with. Her term as the first woman commissioner came to an end at midnight on Sunday.

Deputy commissioner Dónall Ó Cualáin, who is in charge of governance and strategy, has taken over as acting commissioner.

In a statement, Ms O’Sullivan said she believed there was support for her to continue in her role but it had become clear to her “that the core of my job is now about responding to an unending cycle of requests, questions, instructions and public hearings involving various agencies including the Public Accounts Committee, the Justice and Equality Committee, the Policing Authority, and various other inquiries” rather than implementing necessary reforms “and meeting the obvious policing and security challenges”.

Allegations that she smeared whistleblower Sgt Maurice McCabe are being investigated by the Charleton tribunal. But it was more recent controversies concerning inflated Garda breath test data, the wrongful conviction of motorists and especially her handling of the financial governance problems at the Garda College, Templemore, that damaged her most.

Ms O’Sullivan took over as acting commissioner in March 2014, after Martin Callinan also stepped down with no notice and amid controversy. She was appointed to the role proper six months later.

In total she spent 36 years in the Garda.

In a statement, Taoiseach Leo Varadkar thanked the outgoing commissioner for “her many years of dedicated service to the State”.

He said he agreed that her decision was made in the best interests of the Garda, “ensuring that it can focus on the extensive programme of reform that is now under way.”

However, he said that the Government would now seek to “accelerate the crucial and essential reform programme” in the force.

Last week he said the commissioner retained the Government’s confidence.

Minister for Justice Charlie Flanagan said he would discuss with his Cabinet colleagues the next steps for the Garda, including the process for selecting a new commissioner.

Labour leader Brendan Howlin said it was now time for an outsider to be appointed to lead the Garda. Ms O’Sullivan was unable to adequately reform the force as she was a product of its culture, he said, and the next commissioner should come “from outside the current ranks”.

The Policing Authority said it was informed of the commissioner’s decision to retire on Sunday afternoon.

“The authority acknowledges with appreciation the service given by Nóirín O’Sullivan to the State and to policing in Ireland over 36 years and wishes her well in the next phase of her life.

“The authority agrees with Ms O Sullivan that the modernisation and reform programme in the Garda Síochána must continue and will work with her successor in that regard.”

The recently established Commission on the Future of Policing in Ireland will now likely be asked to examine breaking up the force into two agencies, one looking after national security, the other traditional policing duties such as tackling crime, road traffic enforcement and other such duties.

Such a move would mean foreign candidates could be hired for senior Garda posts without the need to open State security practices and secrets to foreign nationals. At present there are only two ways into the force; by joining as a recruit or from the PSNI.

The lack of new management styles and ideas coming into the organisation at or near the top is regarded as having had a stifling impact on the force’s modernising and opening up.

Ms O’Sullivan was hired after the first open international competition to fill the Garda commissioner’s role.

Government sources believe the remuneration package for the post needs to be increased from about €180,000 a year plus allowances, and that State security should be taken out of the Garda organisation so recruitment could be opened internationally across the many ranks of the force.

The Policing Authority, which became operational after Ms O’Sullivan secured the commissioner’s post, will now effectively recruit her successor.

Chairwoman Josephine Feehily has previously said the commissioner’s remuneration needs to be increased in order that quality international candidates would be attracted.

Remains of 19 women who died at mother and baby home remain missing 21:00
Covid-19: Vaccination of vulnerable under-60s to resume 21:00
Policing Authority calls for improvement in Garda response to information requests 20:59
Robert Watt advises managers not to engage with ‘toxic’ social media 20:48
Gardaí investigating death of man (71) who fell from a roof 20:44