O’Sullivan and Fitzgerald to be questioned at tribunal in January 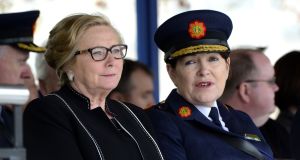 The former Garda commissioner Nóirín O’Sullivan and former tánaiste Frances Fitzgerald are among the witnesses to be called when the Charleton Tribunal resumes public hearings in January.

A number of senior civil servants linked with the email that provoked the controversy that led to Ms Fitzgerald’s resignation as tánaiste, and almost caused the collapse of the Government, are also due to make an appearance when the tribunal resumes hearings on January 8th.

The former commissioner is due to give evidence on January 10th as is the barrister who acted for her during the sittings of the O’Higgins Commission, which sat in private.

The instructions given to Colm Smyth SC in relation to the questioning of Garda whistleblower Sgt Maurice McCabe at the commission is to be the subject of the first two weeks’ of the tribunal’s resumed deliberations.

Mr Smyth is to give evidence on the same say as Ms O’Sullivan, and immediately after her.

A number of senior civil servants from the Department of Justice, including Michael Flahive and former secretary general, Noel Waters, are to give evidence before Ms Fitzgerald is scheduled to give her evidence on January 16th.

The tribunal is expected to explore the extent to which the department was aware of the strategy to be followed by the commissioner’s legal representatives, at the commission. The email that led to the recent controversy, and the department’s disclosure of the document to the tribunal, are also likely to feature the sittings.

Mr Flahive wrote the email which was received by, amongst others, the assistant general secretary of the department Ken O’Leary and the then tánaiste private secretary Christopher Quattrociocchi, both of whom are also to give evidence.

Ms Fitzgerald’s former adviser in the department, Fine Gael councillor William Lavelle, who also received the email, is to give evidence as is Dale Sunderland, the former head of communications at the department.

The last witness listed is Sgt McCabe, who is to be questioned on Thursday, January 18th, about the commission sittings.

It is expected that the tribunal will then begin hearing public evidence on other aspects of its terms of reference to do with allegations that senior Garda management sought to blacken the name of Sgt McCabe, including by way of briefing journalists.