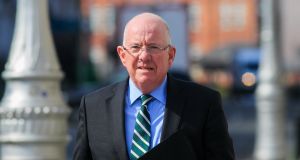 Minister for Justice and Equality Charlie Flanagan said there a process had already begun within his department to formulate legislation that would ‘deal with’ hate speech and hate crimes. Photograph: Gareth Chaney/Collins

The number of hate crimes recorded in the Republic declined significantly last year after increasing for the previous five years, according to Garda data obtained by The Irish Times.

Unpublished figures from An Garda Síochána show there were 250 crimes recorded in 2019 that were judged to have a hate-based motive, a decrease of 26 per cent on the previous year’s 340 crimes.

The data does not capture hate speech, such as racial or homophobic verbal abuse or name calling, as that is not a criminal offence here.

The Immigrant Council of Ireland said the crimes that were coming to the attention of the Garda were “only the tip of the iceberg”.

“This is partly due to a feeling that it might not be taken seriously, as well as the retraumatisation of relaying the abuse,” said Pippa Willoughby, the council’s advocacy manager.

The issue was especially crucial now, she said, following the Black Lives Matter protests in Ireland and so many people speaking about their own experiences of racism.

Minster for Justice and Equality Charlie Flanagan told The Irish Times a process had already begun within his department to formulate legislation that would “deal with” hate speech and hate crimes, with a public consultation programme launched last October.

A new Anti-Racism Committee was also established in June 2019, to advise Government on strengthening Ireland’s approach to hate crime and hate speech.

In reply to queries, Garda Headquarters said a major programme of reform was now under way to bring about an increase in the reporting of hate crime so “accurate and reliable data” could be provided and intelligence-led policing could be put in place to prevent and detect the crimes.

Garda Headquarters added that last October a working definition of hate crime was introduced in a bid to protect all minorities as Irish society became more diverse.

The Garda now defines a hate crime as “any criminal offence which is perceived by the victim or any other person to, in whole or in part, be motivated by hostility or prejudice, based on actual or perceived age, disability, race, colour, nationality, ethnicity, religion, sexual orientation or gender”.

A new version of the Garda’s Pulse database was set for launch in September to classify better both hate-based crimes and other hate incidents that were not criminal offences. This would be accompanied by enhanced training for gardaí. More comprehensive hate crime data would be available before year-end.