Tourist who informed gardaí about note warned not to speak of incident, says source 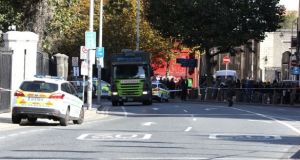 A note praising the September 11th attacks on the United States was found near the scene of a small explosion at Christchurch Cathedral in Dublin last week, a witness told gardaí.

The note was found attached to a rose which had been placed in the grounds of the cathedral. An American tourist told investigators he picked up the flower, along with a second one, and threw them into a bin on the street outside. In less than a minute there was a loud bang and smoke started pouring from the bin.

Gardaí believe the detonation was caused by a firework but it is not clear if it was linked to the flowers. However, the presence of the note prompted gardaí to shut down the surrounding streets and call in the Defence Force’s bomb squad to perform a post-blast analysis.

Following the incident, detectives interviewed the American tourist over the course of about two hours and twice warned him not to speak about the incident, an informed source said.

The Defence Forces later said “firework remnants in suspicious wrapping” were found in the bin.

Asked about the presence of the note at the scene, a Garda spokesman declined to provide any details and said there are no ongoing investigations.

“Gardaí dealt with an incident that occurred on Monday 21st, October 2019 at Christchurch, Dublin 8 at approximately 1pm. No further information. No further investigations,” he said.

The tourist told gardaí he was sitting outside Christchurch with his family, waiting for a tour of the cathedral to start, when he noticed two individually wrapped roses sitting on a wall. He said he went to examine them and noticed a note attached to one praising the September 11th attacks and mentioning the terrorist group al-Qaeda.

The tourist told gardaí he was angered by the note as he was a US military veteran. He said his friend threw the flowers into the bushes. A few minutes later the tourist returned, broke up the flowers and put them in a bin on Christchurch Place, gardaí were told.

Less than a minute later something detonated inside the bin. Gardaí sealed off the street and the Army bomb squad arrived at the scene a short time later.

The bomb squad deployed a robot to assess the scene before a technician wearing a blast suit carried out a further examination. He recovered the remnants of a detonated firework which was handed over to gardaí.

The tourist who found the flowers told gardaí he had observed two men acting suspiciously nearby before the incident. He was taken to an office in the cathedral where he was asked to try identify the men on CCTV footage.

CCTV showed someone dropping off the flowers at 3pm the previous day but the man could not say if they were one of the same people he saw acting suspiciously on the Monday.

The man was interviewed by detectives for about two hours. He told gardaí no one had walked past the bin in the period between him throwing the flowers in and the detonation. After the interview gardaí asked him not to speak about the incident to anyone.

A few days later, after he had returned to America, the man was again contacted by gardaí and asked not to speak about it.

A detective told the man gardaí believed the firework was ignited by a lit cigar someone had thrown in the bin.