The driver of the car involved in the collision was uninjured 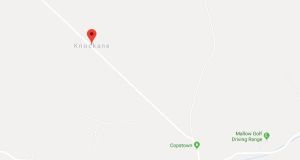 A 19-year-old motorcyclist was killed in a traffic collision in Mallow, Co Cork, on Thursday evening

A 19-year-old motorcyclist was killed in a traffic collision in Mallow, Co Cork, on Thursday evening.

The crash occurred at Knockane, Ballyclough, Mallow, Co Cork, at around 7.30pm.

The young male motorcyclist was pronounced dead at the scene, and his body was taken to Cork University Hospital, where a post mortem is due to take place later.

The motorcycle was involved in a collision with a car, and the driver, a man in his early 70s, was not injured.

Gardaí have closed off the road with local diversions in place, while forensic collision investigators study the scene of the crash.

Gardaí are appealing to any motorists who may have been driving down the road at the time of the collision to contact Mallow Garda Station on 022 - 31450, or the Garda Confidential Line 1800 666 111.