Molly Martens Corbett’s first words to police: ‘I tried to hit him... I do not remember’

In an interview with American network ABC recorded before the verdict, Molly Martens Corbett and her father, Thomas Martens, recall the night of Jason Corbett's murder. Video: ABC 20/20 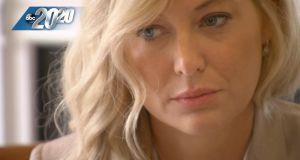 Molly Martens Corbett’s written statement to Davidson county police in North Carolina admits she attempted to hit her husband Jason Corbett with a brick she had on her nightstand.

In the one page statement, obtained by The Irish Times, Martens Corbett said she did not remember, however, what happened on the night after that.

On Wednesday a jury found Ms Martens Corbett (33) and her father Thomas Martens (67) guilty of the second degree murder of her husband, Limerick man Jason Corbett (39). The pair were sentenced to 20 to 25 years in prison.

Martens Corbett’s statement, which ran just over 14 lines, said her husband Jason woke up and had an argument with her before “he applied pressure to my throat/neck and starting choking me”.

She wrote: “At some point I screamed as loud as possible. He covered my mouth and then started choking me again with his arm.”

Her father Thomas Martens then entered the room with a baseball bat, the statement continued.

“I cannot remember if he said something, or just hit Jason to get him off me. Jason grabbed the bat from him and I tried to hit him with a brick... I had on my night stand. I do not remember clearly after that,” she wrote.

The statement was taken on the day of the murder, on August 2nd 2015. It was entering into evidence and seen by the court, but Martens Corbett choose to not testify in front of the court in the trial.

District Attorney Garry Frank said the cement brick was the “smoking gun” in the prosecution’s consideration over potentially taking a first-degree murder charge for the killing of Mr Corbett by his wife and father-in-law.

The North Carolina Davidson county DA said the cement brick kept on the nightstand “strongly” suggested the murder was intended and premeditated.

The prosecution, however, feared despite having probable cause, they would not be able to prove beyond reasonable doubt Martens Corbett has planned to murder her husband with the cement brick.

Her decision to not give testimony in her defence meant the prosecution could not question her in front of the jury about the brick and the alleged altercation.

Both she and her father were convicted on a charge of second-degree murder by Davidson County Superior Court on Wednesday.

In an interview recorded with a US television network before the trial, Martens Corbett claimed she was told by police that “it looks like self-defence” and that “it’s going to be ok”.

Her father Tom Martens also described the Limerick native as being a “deadly threat” on the night of the incident in August 2015.

The claims are made during interviews with the pair recorded for ABC’s 2020 show, which is due to air in the US on Friday evening.

Both Martens Corbett and her father repeatedly emphasised that their actions amounted to self-defence over the course of the interview.

Mr Martens claimed during the trial that his daughter was being strangled by her husband prior to his death, and they entered a plea of self-defence which was unanimously rejected by the court’s 12-person jury.

“I didn’t murder my son-in-law. And I would challenge any reasonable man, much less a reasonable father, to say that this was unnecessary force,” the former FBI agent told the television channel.

“I used the force that was necessary to end the threat. That’s what I was trained to do for over 31 years, end the deadly threat,” he added.

Excerpts of the conversation released by ABC in advance of the show’s airing also included claims from Mr Martens that he could not say for certain if his daughter hit Mr Corbett with a paving stone during the attack.

Graphic images shown to the court over the course of the trial showed a heavily-bloodstained paving stone which Martens Corbett admitted to keeping on her bedside table, and she also told investigators during police interviews that she did strike her husband with the object.

She declined to talk to ABC, however, about the matter.

Her father told ABC that he heard a noise upstairs in the early hours of August 2nd, 2015 when he was staying in the basement of the couple’s house, and goes on to describe the ensuing fight.

“I don’t know what precisely woke me up, but what I heard were loud voices and a kind of, like, thumping, like heavy feet, you know, moving around. And it was coming from the floor above me. It was in the dead of the morning, and it wasn’t right. Something bad was going on,” he said.

In her interview, Martens Corbett alleges Mr Corbett had choked her in the past to keep her quiet, as she says he was doing on the night in question, so as not to alert her parents to the commotion.

When her father came into the bedroom armed with the bat, she claims that Mr Corbett was able to choke her “with one hand” while also grabbing the bat being swung by Martens in mid-air.

Martens Corbett repeats assertions that she performed CPR on her husband despite no evidence of this being found by investigators, and says she was terrified that he would “sit up and start choking me again” as he lay on the ground with traumatic fractures to the skull.

“I think I was so upset that I couldn’t - but I was doing my best to perform CPR to the best of my ability... and trying to make sure that he would be ok. But I was scared the whole time,” she said.

When she was subsequently ushered to a police patrol car Martens Corbett claims that she was told: “Don’t worry. It looks like self-defence. It’s going to be ok.”

She chose not to take the stand during the trial to defend her actions and prosecution for the state alleged that this was because it would be too complicated to align her version of events with that of her father’s under cross-examination.

Martens Corbett has been described as a “fantasist” by some who knew her, with family of Mr Corbett saying that she had a long history of lying about everything from being an Olympic swimmer to foster parenting a six-year-old boy.

The pair’s inmate files outlined they are both classified as “close custody” or maximum security prisoners.

A spokesman for the North Carolina Department of Public Safety, which is  responsible for the state’s prison service, said due to Martens’ “high profile” he is being kept in “restricted housing” away from other prison inmates. The 67 year old also served as an FBI officer for 31 years.

The spokesman for the state’s correctional facilities said there “could be” a threat to Martens’ safety, and he will be kept in restricted housing in the large facility for a month to six weeks. During this time his physical and mental health will be assessed.

If he is the victim of violence when in prison, Martens can apply for protective custody. The prison service spokesman said such situations are reviewed when applications for protection are made, and “a transfer to another institution in state or out of state could occur if the situation dictates.”