Molly Martens Corbett claims she was abused by husband

In an interview with American network ABC recorded before the verdict, Molly Martens Corbett and her father, Thomas Martens, recall the night of Jason Corbett's murder. Video: ABC 20/20 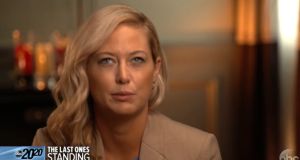 The US TV interview which aired on Friday night was recorded before Molly Martens Corbett (pictured) was convicted of second-degree murder.

Convicted murderer Molly Martens Corbett has claimed that she was abused by her husband, Limerick man Jason Corbett.

A US TV interview, which aired on Friday night, was recorded before Martens Corbett (33) and her father Thomas Martens (67) were convicted by jury on Wednesday of the second degree murder of Mr Corbett (39). The pair were sentenced to 20 to 25 years in prison.

In the interview, Martens Corbett described her husband as “very controlling” and “very possessive”.

“Sometimes he would be angry and choking me and it would turn into something sexual,” she told ABC’s 20/20 programme. “Or sometimes the other way around.”

“Everything always felt so real and so scary in the moment when it was happening.”

No evidence was produced during the trial to support allegations of abuse, and Martens himself told the trial he did not witness any physical violence between Mr Corbett and his daughter prior to an altercation which he claimed had occurred on the night he was murdered.

Martens Corbett said she passed out sometimes and it always made her think of his first wife and wonder what happened to her.

“The first time, the second time, the third time, the twentieth time that you are suffocated or strangled or someone holds their hand over your mouth or a pillow on your face and you can’t breath for an extended period of time, you know you think: ‘Oh, well, his first wife died at 3 o’clock in the morning. Maybe that is going to happen to me.’”

Mr Corbett’s first wife Mags, the mother of his two children, died of a sudden asthma attack in 2006. Her family have previoulsy described as “lies”, claims by Thomas Martens that he was told Mr Corbett was involved in the death of his first wife.

Martens Corbett said she never would have left Mr Corbett’s two children, Sarah (9) and Jack (12). “Sometimes I thought, maybe I am being selfish. Maybe their lives would be better?” but said she always concluded they should not lose another mother.

Martens Corbett had sought to adopt the children, but Mr Corbett refused. After his death in August 2015 she had sought and was refused custody of the two children. Guardianship was awarded to the children’s aunt, Tracey Lynch, and her husband, David.

Both Martens Corbett and her father repeatedly emphasised over the course of the interview that their actions amounted to self-defence.

Martens claimed during the trial that his daughter was being strangled by Mr Corbett prior to his death, and they entered a plea of self-defence which was unanimously rejected by the court’s 12-person jury.

Martens Corbett chose not to take the stand during the trial to defend her actions and prosecution for the state alleged that this was because it would be too complicated to align her version of events with that of her father’s under cross-examination.

Martens Corbett has been described as a “fantasist” by some who knew her, with the family of Mr Corbett saying that she had a long history of lying about everything from being an Olympic swimmer to foster parenting a six-year-old boy.