Commemoration follows apology to Majella Moynihan over her treatment in 1984

An event to mark the 60th Anniversary of Women joining An Garda Síochána has taken place in Dublin. In 1959 12 female recruits participated in a 22 week training course before being allocated to Pearse St Station, Dublin. Video: Bryan O'Brien 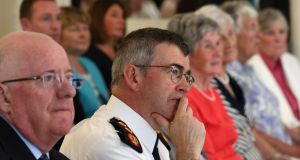 Majella Moynihan continues to speak very highly of the support she received from her Garda colleagues, especially other women, while efforts were being made to discipline her for having a baby, Minister for Justice Charlie Flanagan has said.

Ms Moynihan has received an apology from Mr Flanagan and Garda Commissioner Drew Harris over her treatment in 1984 when efforts were made to discipline her after having a baby “out of wedlock”.

She gave up her child for adoption, saying she was pressured from within the Garda to do so, and she eventually left the force early.

Speaking at an event in Farmleigh in Dublin’s Phoenix Park to commemorate the 60th anniversary of the first group of women joining the Garda, Mr Flanagan said Ms Moynihan had told him she was very happy with the “spirit of solidarity” she experienced during her ordeal.

And he added the 12 women who were the first to join the Garda back in 1959 had opted “bravely” for a career in policing at a time when that was not an easy career for a woman.

“The vanguard would undoubtedly have been a more apt title than ban garda,” he said of the “pioneering” first group of women who joined the force.

“Your courage, your resilience, your dedication and years of service have been an inspiration to the generations that followed you,” he told some of the women, now in their 80s, who were present at the event.

Since they had enjoyed their careers, women have gone on to senior roles in the Garda, Mr Flanagan said. Two female assistant commissioners were present: Orla McPartlin and Anne Marie McMahon.

The now-retired Nóirín O’Sullivan had in recent years been the first woman to become Garda commissioner. Ms O’Sullivan, he said, had since gone on “to deservedly great things in a senior role at the United Nations”.

He believed the Garda was a very attractive career for women and he urged more women to join. While some 27 per cent of the Garda was now female, Mr Flanagan said more were needed in senior roles and to improve the decision-making process.

Away from the issue of women in the Garda, Mr Flanagan said he was “very concerned” at recent political developments in Britain. It was a source for worry that a no-deal Brexit now “seems to be central to the political agenda in Britain”.

“I’m very conscious of the need to ensure any uncertainty doesn’t result in political turbulence that might give rise to security concerns,” he said.

Mr Flanagan added that on October 31st, the European arrest warrant “falls”, a reference to the warrant ceasing to include Great Britain and Northern Ireland after that date. A replacement was required at the earliest opportunity.