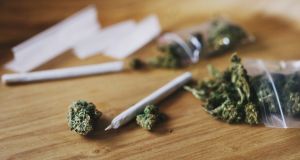 The number of people arrested for the sale or supply of drugs so far this year stands at about 5,100.

Arrests for the manufacture or cultivation of drugs has doubled this year, a reflection of the Covid-19 pandemic’s impact on the Irish drugs market.

Interruption of regular drug production and distribution routes caused by Covid-19 has led to an increase in criminals growing and manufacturing drugs at home or in business premises, according to Garda sources.

This, combined with an increase in the number of drugs squad gardaí, has led to 336 arrests for drug cultivation or manufacture so far this year. The majority of these arrests related to the cultivation of cannabis in the home for onward sale.

The number of people arrested for the sale or supply of drugs so far this year stands at about 5,100, a 28 per cent increase on 2019, while the amount of cash seized from criminals has roughly doubled to €18 million.

The figures were detailed by Garda Commissioner Drew Harris on Monday at the launch of an evaluation report into a new crime reduction mechanism called the Community Crime Impact Assessment (CCIA) tool.

“Covid has changed the way organised crime groups are operating and how drug production and distribution has taken place. And they indeed they have quickly adapted,” the Commissioner said.

He pointed to a recent UN report on drugs crime which stated temporary unemployment caused by Covid-19 is disproportionately impacting poorer communities which are in turn being targeted by drug gangs.

“We have been working hard throughout the pandemic to prevent this,” Mr Harris said.

CCIAs allow disadvantaged communities to collectively highlight issues of crime and anti-social behaviour which are then acted upon by the Garda and local authorities.

Praising the report, Mr Harris said there is a lot the Garda can do to combat community level crime “but we can do a lot more when we are working in partnership with others”.

CCIAs have been suggested as a way of addressing drug debt intimidation which has become a major problem in disadvantaged communities in recent years.

“We are very much concerned about drug related control and intimidation and with the amount of influence these criminal networks can bring to bear,” the Commissioner said.

He urged people to report drug debt intimidation to the National Drug Related Intimidation Reporting Programme. Under the programme, Garda inspectors are trained in each division to deal with reports of intimidation. “They will meet victims in an formal or informal setting.”

Mr Harris said the Garda recognises that “sometimes these problems are very complex and require a significant policing effort to try and deal with them and bring the perpetrators of intimidation to justice.

“But we have had success this year around drugs intimidation. And that has given us all some glimmer of hope that individuals can be brought to justice for this particular crime.

“I would ask people to report instances of intimidation. We will seek to deal with those with utmost professionalism and indeed in confidence.”

4 Hotel isolation for 20 states excludes US, UK where cases ‘rampant’