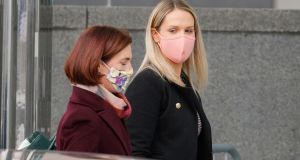 Minister for Justice Helen McEntee has said that she wants to change the law “as quickly as possible” with regard to the Court of Appeal ruling banning the naming of children who have been victims of crime.

“I want to change this. The number of people it’s having a negative impact on is huge.”

Ms McEntee told RTÉ radio’s Today with Claire Byrne show that she was working to have the law changed as quickly as possible following her determination that her department had responsibility for the issue.

The existing legislation, “in an inadvertent way,” protected the defendant, she said.

The Court of Appeal in October rejected an application by several media outlets to allow them identify a woman who killed her three-year-old child. She was found not guilty of murder by reason of insanity following a short trial last year.

Before the trial began, two High Court judges ordered that the victim should not be identified. Consequently, the woman could not be named.

Counsel for the Director of Public Prosecutions had requested the order, holding that Section 252 of the Children Act 2001 makes it an offence to publish anything that could identify a child who is an alleged victim of an offence, including a deceased child.

The Court of Appeal upheld that interpretation. Mr Justice George Birmingham said that while its ruling might be of surprise to the media, it was not possible to read Section 252 “as not including a deceased person who was a child at the time of death”.

Section 252 states that in “any proceedings for an offence against a child... no report which reveals the name, address or school of the child or includes any particulars likely to lead to his or her identification... shall be published or included in a broadcast.”