Barry Wolverson was shot as he sat in a car at Killeek Lane, Swords on January 17th 2020 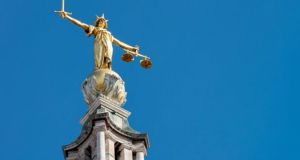 Two men are already before the courts charged in relation with the attempted murder of Barry Wolverson.

A man who had been critically ill in hospital since being shot in an attack over a year ago in Dublin has died in hospital.

Barry Wolverson was shot as he sat in a car at Madigans Yard, Killeek Lane, Swords, Co Dublin on January 17th, 2020.

Two men are already before the courts charged in relation with the attempted murder of Mr Wolverson.

Following the death yesterday of the Dubliner, who was in his 40s, a postmortem was due to conducted on his remains.

Depending on the outcome of that examination, the criminal investigation in his death, which has to date been treated as attempted murder, may change.

“The post mortem results will determine the course of the investigation.”

The two Dublin men who were charged with trying to murder Mr Wolverson will stand trial at the non-jury Special Criminal Court.

Robert Redmond (32), of Woodview Close, Donaghmede, Dublin 13 and Bernard Fogarty (33), with an address at Cromcastle Court, Kilmore, Coolock, Dublin 5 are both charged with the attempted murder of Mr Wolverson at Madigans Yard, Killeek Lane, Swords, Co Dublin on January 17th, 2020.

The two accused men are further charged with possession of a firearm and ammunition with intent to endanger life or cause serious injury on the same occasion.

The Director of Public Prosecutions (DPP) applied to the three-judge court on January 18th last to make an order under Section 49 of the Offences Against the State Act that the defendants be tried before the Special Criminal Court.

Presiding judge Mr Justice Tony Hunt made the formal order on that date for the men’s cases to be heard at the non-jury court.

At brief court hearing last month, the accused men appeared via video link from prison and State Solicitor Michael O’Donovan told the three-judge panel that disclosure in the case was at the “very early stages”.

Mr Justice Hunt, sitting with Judge Gerard Griffin and Judge Flann Brennan said that six weeks was required to allow for disclosure to be served on the defence. The judge listed the case for mention before the non-jury court on March 5th, when the two accused men are required to be in attendance.