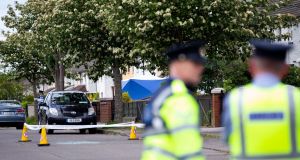 Gardaí at the scene of a fatal shooting incident at Kilbarron Avenue, Coolock, Dublin, on Tuesday. Photograph: Tom Honan

A man has been shot dead in a gun attack in north Dublin on Tuesday afternoon.

Hamid Sanambar, a 42-year-old originally from Iran, was gunned down on Kilbarron Avenue, Coolock, north Dublin, at about 3.30pm.

While the murder inquiry was only beginning on Tuesday evening, gardaí believe the fatal shooting was linked to the gun murder of Sean Little (22) in north Co Dublin last week.

One line of inquiry was that the man shot on Tuesday was a drug dealing associate of Mr Little’s.

The victim was attacked at about 3.30pm, with gardaí and paramedics dispatched to the scene.

While gardaí had not named the dead man on Tuesday evening, sources said he was a foreign national in his 40s who had emigrated to Ireland.

Dublin’s latest shooting comes a week after two men – Sean Little (22) and Jordan Davis (22) – were shot dead within 24 hours in the city.

It is understood the man shot dead in Tuesday had just called to the Little family home on Kilbarron Avenue, Coolock, or was on his way there when he was shot dead.

Gardaí believe at least two people were involved; a gunman and a getaway driver. A vehicle found burnt out in north Dublin a short time after the murder is believed to be the car used by the killers.

“Gardaí and emergency services are currently at the scene of a shooting incident in the Kilbarron Avenue area of Coolock,” the Garda said in a statement.