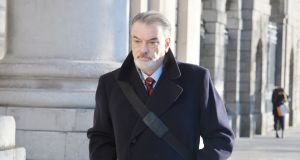 If convicted of voluntary homicide, Ian Bailey could be sentenced to 30 years in prison. Photograph: Alan Betson

The trial of Ian Bailey for the voluntary homicide of Sophie Toscan du Plantier opened on Monday in the Salle Victor Hugo at Paris’s old Palais de Justice.

The courtroom is panelled with dark wood and has an elaborate ceiling adorned with a sword, hatchet, scales of justice and all-seeing eye.

The only thing missing was Mr Bailey, who is accused of killing the 39-year-old French film producer in Toormore, near Schull, west Cork, in December 22nd, 1996.

“We consider that Ian Bailey is absent without a valid excuse,” Judge Aline said.

She read a list of more than 20 Irish witnesses who had been summoned. “No reply,” the clerk answered over and over.

Several witnesses were unknown at the addresses the documents were sent to. One was dead, another incapacitated by dementia.

Yet the hearing schedule sent out on Monday included all their names, and days and times for them to testify.

Mr Bailey’s partner Jules Thomas and her three daughters have said they will not come to Paris. Their names also appear on the trial schedule.

Marie Dosé, a lawyer for the victim’s family, complained that journalists in the room were texting messages to Mr Bailey, who was being filmed in west Cork, reacting to his trial.

“It shows Mr Bailey knows what is going on,” the judge remarked sarcastically.

The judge read the charge sheet.The court heard that Mr Bailey had cuts on his hands, forearms and forehead after the murder but not before, that he changed his story about his whereabouts on the night of the killing, that he stopped on a hill to look at Ms Toscan du Plantier’s house by the full moon on the night of the murder, staged a bonfire a few days later, “confessed” repeatedly to the crime.

Michel Larousse, an investigator who wrote a profile of Ms Toscan du Plantier for the investigating magistrate, testified that she had been unhappy in love but was reconciled with her husband at the time of her death.

The prosecutor said Mr Bailey had propagated a theory that Ms Toscan du Plantier was murdered by a lover. She had asked several friends and relatives to travel with her to Ireland, the prosecutor noted. She had called her husband repeatedly during her stay, which would have been unlikely if she had gone to West Cork with a lover, the court heard.

Damien Roehrig, a French gendarme assigned to the case in 2011, interviewed dozens of Irish witnesses. At least five of those to whom Bailey “confessed” - Helen Callanan, Bill Fuller, Malachi Reed and Richard and Rosie Shelley - had never altered their testimony.

Mr Reed, who was 14 years old at the time, wasa so traumatised that he slept with an axe by his bed.

Mr Bailey always wore shorts, even in winter, and frightened a neighbour by howling at the full moon like a wolf, Mr Roehrig said. “Some people thought he was harmless. Until the murder happened, he passed for the local eccentric.”