Man sentenced to nine years for killing in row over chihuahua 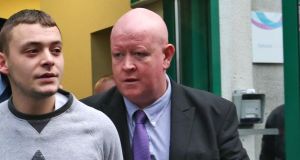 Wayne Cluskey (left) who has been sentenced to nine years in jail for his role in the death of Christopher Nevin. Photograph: Collins

Wayne Cluskey has been sentenced to nine years in prison for his part in the killing of Christopher Nevin during a row over a pedigree Chihuahua.

Cluskey (25) of Mooretown, Ratoath, Co Meath was found not guilty of murder but guilty of manslaughter for his part in Mr Nevin’s death.

Mr Nevin’s wife Lisa had to be removed from the Central Criminal Court on Monday after she began shouting in response to the sentence handed down by justice Patrick McCarthy.

She could be heard saying: “Nine years, and I never get to see his face again.” Her family and gardaí asked her to stop shouting before she was taken out of court.

During his trial last month Cluskey (25) from Mooretown, Ratoath, Co Meath was found not guilty of murder but guilty of manslaughter over the death of Mr Nevin outside a house in Navan on November 19th, 2015.

His co-accused Josh Turner (24) also from Mooretown, Ratoath, was convicted of murder and sentenced to life.

During the trial it emerged the fight happened after Turner loaned Mr Nevin a male chihuahua to breed with three female chihuahuas.

When only one of the dogs got pregnant there was a dispute over how much money Mr Nevin would pay to Turner.

At Monday’s hearing the judge said the appropriate sentence for what Cluskey did would be 12 years but he was reducing it to nine having taken into account his offer of a plea of guilty to manslaughter before the trial began.

He said the jury’s decision meant they accepted that Cluskey had believed he was using reasonable force in self-defence when he took an axe from the back of his car and ran towards Mr Nevin.

He said CCTV shown to the trial showed a confrontation between Turner and Mr Nevin. Mr Nevin was holding a hatchet and shouting at Turner.

However, the judge said there was no need for Cluskey’s intervention because there was some distance between Turner and the deceased.

After Cluskey ran in, he grappled with Mr Nevin on the ground and Cluskey appeared to drop the axe.

As Cluskey and Mr Nevin struggled on the ground Turner picked up the axe and struck Mr Nevin a number of blows before Cluskey got free, pulled a hatchet from Mr Nevin’s hands and used it to strike Mr Nevin twice.

The judge said, in those circumstances, the fact that he thought he was using reasonable force does not dilute his guilt to the extent it might in other cases.

“This is, in terms of manslaughter, very serious indeed,” he said, adding that it is made worse by the weapon that Cluskey brought to the fight.

He noted the impact statements made by Mrs Nevin and Christopher’s mother Mary Nevin, in which they described how their lives and families were broken by his death.

The judge also said he had considered the fact that Cluskey handed himself into gardaí but said he was not impressed by the fact that he then gave the gardaí a “version of events that was manifestly untrue”.

In handing down sentence he said sentencing is not an act of vengeance but must be balanced with the need for rehabilitation.

He said the appropriate sentence would be 12 years but taking into account the early offer of a plea of guilty to manslaughter he would reduce it to nine years.

The sentence was backdated to November 23rd, 2015 when Cluskey first went into custody.