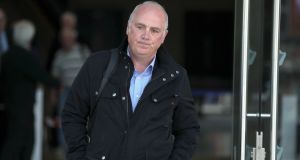 Former Anglo Irish Bank chief executive David Drumm on Wednesday became the most senior banker at the defunct lender to be convicted over transactions conducted during the 2008 financial crisis.

Drumm (51), of Skerries, Co Dublin, was convicted on two counts of deceiving depositors and investors into believing that Anglo was healthier than it actually was at the height of the crisis almost a decade ago.

He was found guilty of conspiracy to defraud and false accounting over deposits circulating between Anglo and Irish Life & Permanent (IL&P) that “dishonestly” created the impression that Anglo’s deposits were €7.2 billion larger than they were at the end of September 2008.

A jury of nine men and three women took 10 hours and 32 minutes, deliberating over four days, to return unanimous verdicts at the Dublin Circuit Criminal Court.

Drumm, who had pleaded not guilty, showed no emotion as the verdict was delivered, concluding one of the longest-running criminal trials in the State’s history.

The former banker, whose meteoric rise to become chief executive of the country’s third-largest bank at the age of 37 will not know how much jail time he faces until a sentencing hearing on June 20th.

The conspiracy to defraud charge carries no maximum jail term, while he faces up to 10 years imprisonment for false accounting.

Drumm’s counsel Brendan Grehan SC asked the judge to consider “as a humanitarian gesture” his release on bail as his wife and children were in the US attending a graduation for one of his children.

Det Sgt McKenna said that Drumm had agreed to be extradited from the US, where he relocated to in 2009, after unsuccessfully seeking bail there and that he was acutely aware of the “substantial sentences” imposed on the three other bankers involved in the fraud.

The judge agreed to release Drumm on bail on the condition he sign on daily at Balbriggan Garda Station and not apply for a new passport.

The prosecution had argued during the trial that lasted almost five months that Drumm was the “man who called the shots” in what the jury was told was a “massive con”.

The jury found Drumm dishonestly and deliberately induced people to lodge or leave money in Anglo when he and others were aware the bank was heading for collapse.

Counsel for Drumm had argued that the banker had “donned the green jersey” during the crisis and “answered Ireland’s call” by authorising the deposits to try to save the bank.

Speaking on the steps of the court shortly after the verdict, Detective Superintendent Gerard Walsh of the Garda National Economic Crime Bureau, who led the investigation into the bank, described it as “one of the more complex investigations undertaken by An Garda Siochana.”

Issuing a general warning about the increasing threats from white-collar crime, Det Supt Walsh said that “business needs to be aware that wrongdoing can also come from within.”

“Today’s verdict emphasises the importance of corporate responsibility at all levels,” he said.

The conviction is the most significant in the investigation into Anglo’s financial transactions conducted in the run-up to the bank’s 2009 collapse, which has cost the public almost €30 billion.